Giant gator shows up at front door of Sarasota home

Here's one visitor you don't want at your front door. This large alligator showed up outside of a Sarasota home Wednesday night and hung out for about 10 minutes on the couple's doorstep.

SARASOTA, Fla. - Here's one visitor you don't want knocking at your front door.

Mark and Jackie Brettingen were in their Sarasota home around 9:45 p.m. Wednesday night when they spotted a giant alligator staring at them through their front door.

As Jackie got closer to record video of the reptile, Mark could be heard in the background warning her to stay back because the gator could break through the glass.

Alligator takes a stroll through Publix parking lot in Florida

Alligators are a common sight in Florida, but it still took one man by surprise to see a large gator taking an early morning stroll outside of a Publix.

The alligator stayed at their doorstep for about 10 minutes before it slowly walked down the path away from the front of their home.

More of the large reptiles have been spotted out and about due to the start of alligator mating season, which begins in May or June. However, their courtship starts in early April -- and that means more alligators sightings as the reptiles venture out in search of their mates. 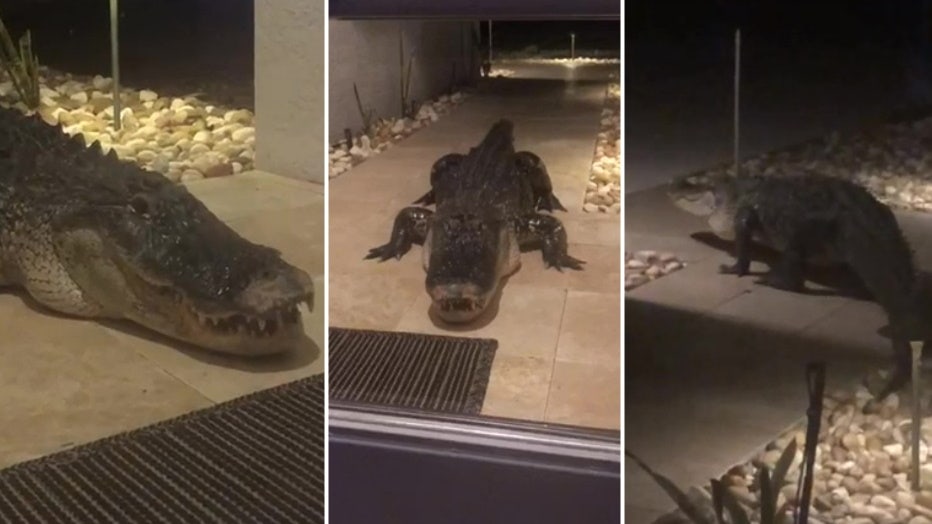 By late June or early July, female gators will lay between 32 to 46 eggs. Incubation periods for alligators take about 60 to 65 days, and baby gators will be born in late August or early September, according to the Florida Fish and Wildlife Conservation Commission.

The couple invited family and friends to their "dream home" for their weekend wedding celebration, saying it was "God's plan" that they should get married there. Just one problem: they didn't own the mansion, and didn't get permission from the owner.

A small alligator wandered onto campus at Zolfo Springs Elementary, so SRO Jennifer Soria and two fellow Hardee County Sheriff’s Office deputies had to remove the "uninvited guest" as they put it.