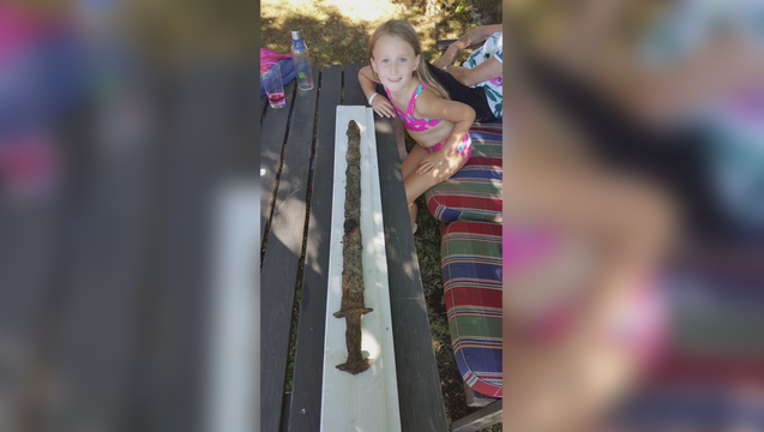 (KMSP) - A young Vikings fan from Minneapolis found a sword experts believe to be from the 4th or 5th century.

With an American father and Swedish mother, the family moved to Sweden last year and found a piece of history they never imagined.

Chatting with us from their home in Sweden, Saga Vanecek and her dad, Andy, are soaking up the international attention from their historic find.

While Saga was swimming in the lake at their summer home in mid-July, the curious eight-year-old resisted calls from her dad to get out of the water.

It’s a good thing she did.

“I felt something with my knee and hand and then I picked it up and it had like a handle and I told dad, ‘Dad I found a sword’ and he thought it was just a stick and he was like, ‘Can't you just come now?’” said Saga with laughter.

Once Andy was convinced about the sturdy - but according to Saga - not very heavy sword, they contacted an archeologist they knew and their local county museum.

The sword measures 85 centimeters long and the museum says it is exceptionally well-preserved, considering it was found in about a half meter of water. The scabbard holding the sword is made of wood and leather and it is tentatively considered to be from the Iron Age - at least 1,000 or even 1,500 years old.

“It all kind of fell into place - a girl named Saga finds a Viking sword and the archeologist lives in the same village,” said Andy. “It was amazing.”

The Vaneceks were sworn to secrecy for two and a half months as Swedish archeologists used metal detectors to delicately search the lake for other treasures. They found a brooch from around the same timeframe plus a coin from the 17th century.

But for these Minnesota Vikings fans, finding a pre-Viking era sword was well worth snapping one last photo and plenty of bragging rights.

“We are just happy it's going to be in a museum today and might even say Saga's name by it,” said Andy. “Super cool.”