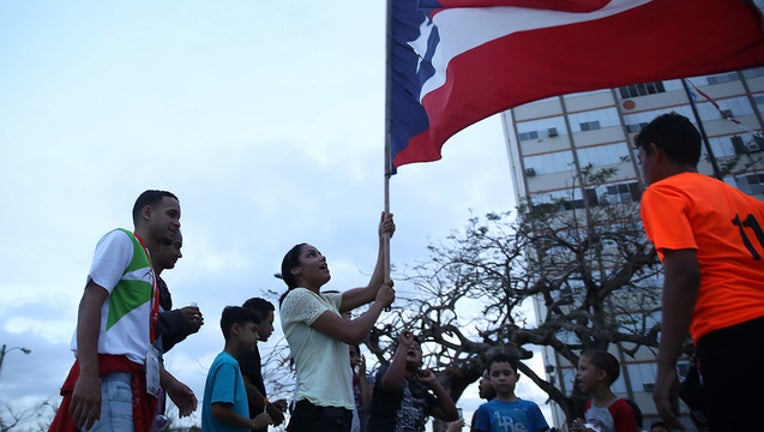 A Puerto Rican flag is waved outside the Torres de Francia complex as people deal with the aftermath of Hurricane Maria on October 1, 2017 in San Juan, Puerto Rico. (Photo by Joe Raedle/Getty Images)

TALLAHASSEE (NSF) - Gov. Rick Scott on Monday declared a state of emergency in Florida in anticipation of ripples from the growing humanitarian crisis in hurricane-ravaged Puerto Rico.

Scott issued the executive order for all 67 counties to help accommodate people who relocate to Florida due to Hurricane Maria.

“With families displaced by Hurricane Maria already present and still arriving in Florida, it is critical that our state is prepared to provide the resources they need upon entering our state,” Scott said in a statement.

Some lawmakers have projected that the crisis could send hundreds of thousands of people from the island to Florida. Without giving numbers, Scott's order said families have already relocated and “are still arriving.”

The executive order includes a series of steps to help prepare for an influx of people from the U.S. territory. For example, it allows the suspension of state laws, rules and orders that could be tied to the emergency and designates Wesley Maul, interim executive director of the Florida Division of Emergency Management, as coordinator of the state's response to the crisis.

Also, it directs that public shelters be made available at the request of local emergency-management officials and allows pharmacists to dispense up to 30-day emergency supplies of prescriptions to evacuees.

The order allows “sufficient funds' be made available from unappropriated surplus funds and the state's Budget Stabilization Fund.

It also bars businesses from selling or renting “at an unconscionable price” supplies, equipment or provisions related to the emergency.

The declaration came as Florida lawmakers continued to push for more federal assistance for Puerto Rico and as Scott said Florida is ready to send relief in the form of the National Guard and supplies.

“The crisis in Puerto Rico is unlike anything we have seen before, and Florida is going to do everything in our power to help everyone impacted by this storm get back on their feet,” Scott said in a prepared statement Sunday.

Scott traveled to San Juan on Thursday and on Friday said he discussed what he saw --- “complete and total devastation” from Hurricane Maria --- during lunch at the White House with President Donald Trump.

Meanwhile, state Rep. Carlos Guillermo Smith, D-Orlando, said the Legislature should hold a special session, as he estimates hundreds of thousands of Puerto Ricans are coming to Florida. The 2018 regular session starts in January.

U.S. Sen. Marco Rubio, appearing Sunday on “Face the Nation,” said signs of progress are being made.

“The problem is, as I said to someone yesterday, there's aid getting to Puerto Rico, but it wasn't getting to Puerto Ricans because it had to be distributed from San Juan to the different municipalities and then within those municipalities distributed to people,” said Rubio, a Miami Republican. “Those distribution systems were victims of the storm themselves. They were broken. And so I felt and continue to feel that the Department of Defense are the only people that could have gone out and reestablished that. And I hope that that's what's begun to happen.”

Before Army Lt. Gen. Jeff Buchanan arrived Thursday in Puerto Rico, Rubio had written to Trump about a need for a clear command structure for the relief effort.

Rubio said the next critical measure that needs to be addressed are hospitals and making sure they have enough fuel to continue operating generators.