Protections for gopher tortoises eased due to habitat loss

TAMPA, Fla. - Gopher tortoises love to dig and can live as long as humans, but the hard-shelled reptile fights threats from all around. Now environmentalists are worried the threats faced by gopher tortoises are even greater after the Florida Fish and Wildlife Conservation Commission (FWC) temporarily relaxed some guidelines for relocating the animals.

The new rule is due to a shortage of sites where the reptiles can be relocated.

Neal Halstead, a senior ecologist and research director at the Wildlands Conservation in Tampa, says gopher tortoises are a state-threatened species, and the space where they can thrive is getting smaller and smaller. When new development moves in, tortoises are moved out – relocated to specially-permitted recipient sites, and there’s a shortage of those places.

"There’s only so many tortoises per acre that the land can support and that creates an issue when you have a lot of tortoises that are being moved at this state of development that eventually you may run out of space for tortoises," said Halstead. 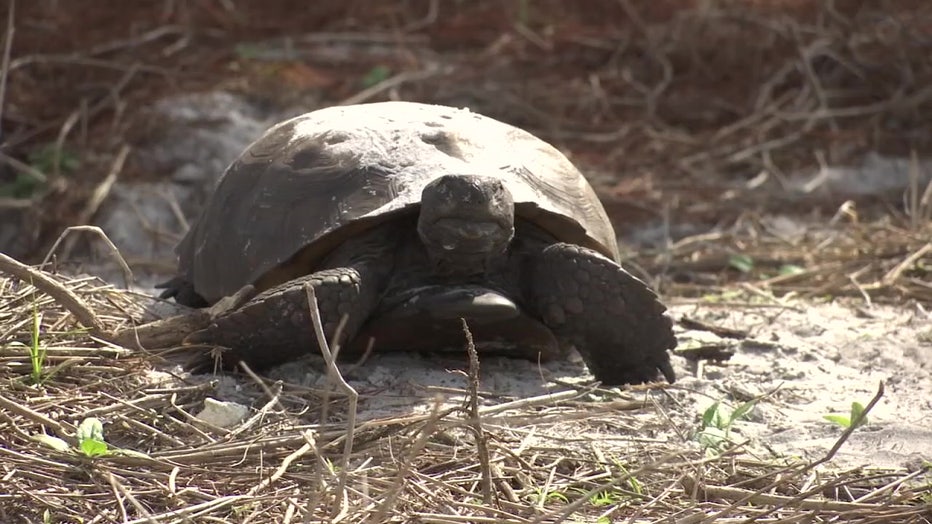 FWC put out an executive order on November 18 to address the shortage and free up space. It temporarily eases guidelines for where developers can relocate tortoises, allowing for relocation more than 100 miles away, as well as a few other changes.

But some environmentalists worry the change won’t help the reptiles in the long term.

"It ignores the biggest threat to the gopher tortoise, which is loss of habitat," said Elise Bennett, a senior attorney at the Center for Biological Diversity. "That's exactly what we're seeing with this executive order, is a crisis where we are running out of places to put them. And so until we put those strong habitat protections in place, the system simply won't work."

The order only lasts 90 days, and FWC is looking for more landowners to help protect gopher tortoises. In an email to FOX 13, FWC said: "These temporary permitting changes were designed to address the current high demand for gopher tortoise recipient sites. Included are deviations intended to free up unused capacity at tortoise recipient sites, allow tortoises to be relocated to any permitted recipient site within the state, and authorize FWC staff to consider alternatives for donor sites on a case-by-case basis. The FWC will prioritize the health and safety of gopher tortoises as it considers proposed alternatives."

"Every time you develop property, move tortoises, you lose habitat and you're also burying everything else that lives in these burrows," said George Heinrich, a wildlife biologist specializing in turtles and the executive director of the Florida Turtle Conservation Trust. "They can provide homes for over three hundred and sixty other species of wildlife that often can't exist in that habitat without the gopher tortoises. So if you don't manage, protect the habitat and manage it properly, then the tortoises leave the burrow collapses and consequently, biodiversity decreases."