TAMPA, Fla. - If it feels like it's hotter than ever outside, that's because it is. Tampa hit 99 degrees this afternoon, tying the all-time record for the hottest day in the city.

The National Weather Service issued a heat advisory this morning, warning for the third day in a row that temperatures would make their way to the mid-90s. Heat index values, meaning the temperature it feels like outside, soared to between 105 to 110 degrees.

"It's been an incredibly brutal week with the heat and humidity," FOX 13's meteorologist Dave Osterberg said. "There's no doubt about it, and it's the same [today]. I'm not going to sugarcoat it."

The city has never officially topped 99 degrees on any day since record-keeping began.

A high pressure system sitting on top of Tampa Bay has made it difficult to generate enough sea breeze or thunderstorm activity to provide some relief. On Friday, isolated thunderstorms should be closer to the coast. Those were usually popping up inland in the past couple of days. 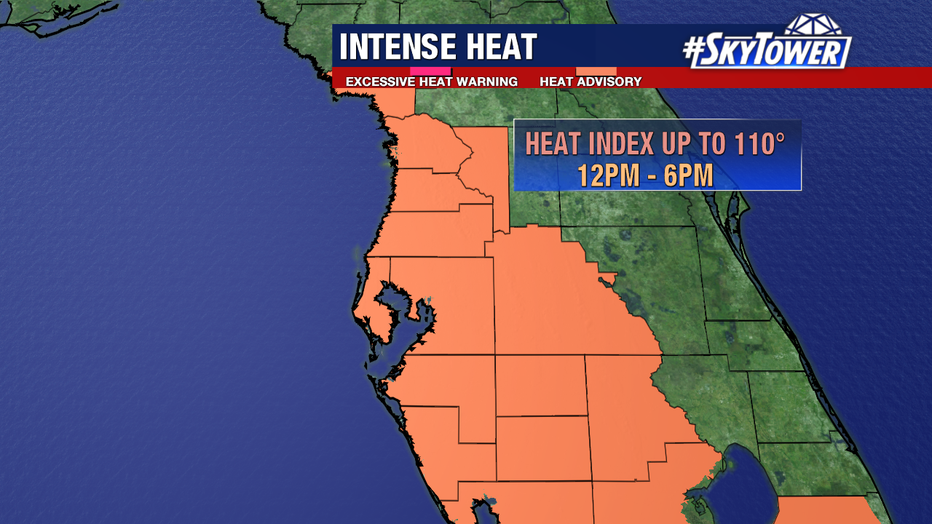 The Department of Health in Hillsborough County says anyone spending time outdoors during the heat advisory should practice heat safety since hot weather can cause stress on the body.

Dress for the heat. Wear lightweight, light-colored clothing. Light colors will reflect away some of the sun's energy. It is also a good idea to wear a hat or to use an umbrella.

Drink water. Carry water or juice with you and drink continuously even if you do not feel thirsty. Avoid alcohol and caffeine, which dehydrate the body.

Stay indoors when possible. If air conditioning is not available, stay on the lowest floor out of the sunshine.

Be a good neighbor. Check in on elderly residents in your neighborhood and those who do not have air conditioning.

Don't forget your pets. Make sure they have access to water, ventilation and shade.