Highlands County's deputy chief for their fire rescue department said damage from Hurricane Ian was widespread in the 2,000-square-mile county -- from rural to urban areas. He said most of the power has been restored but the agriculture industry was hit hard.

SEBRING, Fla. - Highlands County is one of the areas hit hard by Hurricane Ian. Highlands County. School is still out Monday and at least one shelter remains open, but progress is being made. Over the weekend, utility crews were able to get the power turned back on for thousands.

Back in 2017, Highlands County was the second-hardest hit county in the state after Hurricane Irma made two landfalls in the state. As of Monday, everyone in the county has been accounted for, said Mark Ellis, Deputy Chief of Operations for Highlands County Fire Rescue.

The county has seen a significant amount of flood and damage.

"The rescue crews were out shortly after the storm, going through the community, going door-to-door in many places, and checking on folks," Ellis recalled. "There were incidents that happen during the actual storm that we had to go back and check. We could not get to [those areas] simply because of storm conditions. So, there was a big push in the 24-36 hours immediately after the storm to go out and look for those rescues and see who was out there and check on people and get into those neighborhoods." 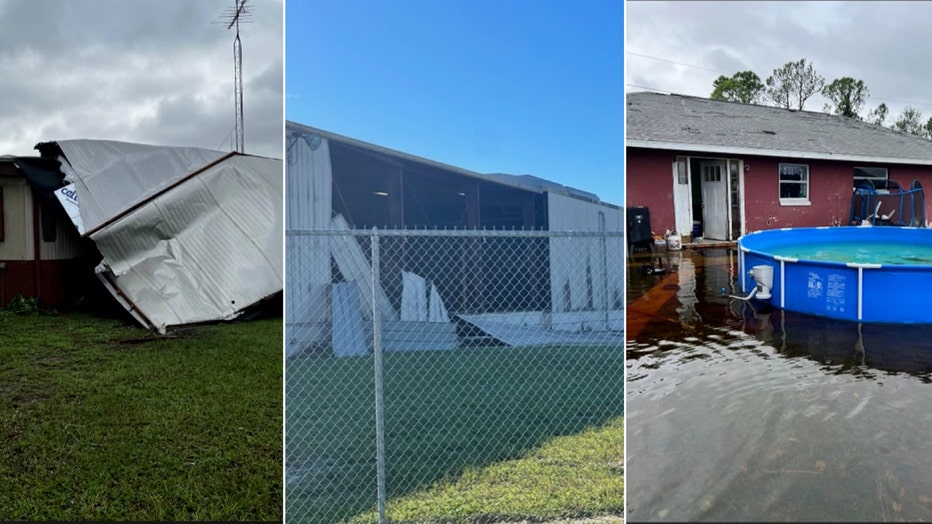 Now, they have to focus on the near future and even further than that. Duke Energy is one of four electric companies in Highlands, but has the lion share of customers. Their goal was to return electricity to 90% of its customers, but they didn't quite reach it.

As of Monday, 14% of utility customers are without power, which is an improvement from the 60% statistic on Saturday.

"They were very, very close," said Ellis. "They'll be looking to get the rest of those cleaned up the rest of today."

Highlands County is 2,000 square miles with lots of rural and agricultural areas.

"Our agricultural folks were hit hard. The industry definitely got hit hard because of the storm and will affect crops moving forward. We have pockets of rural areas," Ellis explained. "City of Sebring, Avon Park are more urban, but they also were hit hard. It's widespread across the entire country."

From 2017: Highlands struggles after Irma

In this 2017 reports, thousands of residents in Highlands were still dealing with the problems left behind by Hurricane Irma. Power remained one of the biggest issues.

After Irma, Adam Putnam, who was the Florida Agricultural Commissioner at the time, announced the 2017 storm wiped out an estimated 70 percent of the citrus crop for the 2017-18 year.

Highlands County had more than eight million orange trees, covering about 12 to 13 percent of the county. Many residents were either employed directly or indirectly in the industry, so it's very important here, Ray Royce of the Highlands County Citrus Growers Association said after the storm passed .

There are still distribution pods are set up for residents. The three locations are:

SEBRING
Sebring Department of Health parking lot, 7205 S. George Blvd.
Traffic will need to turn onto State Road 66 from U.S. 27, then turn onto South George Boulevard and follow all traffic control devices and flagmen through the POD, then exit back out to South George Boulevard to U.S. 27.
The public will not be able to access the POD from U.S. 27.

LAKE PLACID
Save A Lot parking lot, 70 Plaza Ave.
Traffic will need to turn onto County Road 621 East from U.S. 27 and follow all traffic control devices and flagmen through the POD, then exit back onto U.S. 27.

"Those pods have been open for two days now, they'll be open today," he said. "We're giving out [ready-to-eat meals], food, and water to the public all they have to do is pull up, and they'll load that stuff in your car for you. We're watching what we call our burn rate, how fast they're going through that. We'll keep distributing until the community doesn't really need the supplies anymore."

Regret and relief in parts of Florida continued Monday. The Florida Medical Examiners Commission confirms nearly 60 deaths related to Hurricane Ian. The number is steadily rising as search and rescue efforts continue around the state, including southwest Florida.

It's also a reminder that any part of Florida can be impacted by a hurricane.

"We're an inland county and people often think these things affect the coast the most," Ellis said. "I will say the coasts are typically affected worse than we are, but that doesn't mean that we don't suffer damage when hurricanes come through. Preparation is the key to success in any disaster like this. This needs to be that wake-up call, especially for those folks that liven the low-lying areas, to seek shelter and get out of those areas. Mobile homes, are also, very, very tough to be in during a storm. Preparation and making sure you get yourself someplace safe during the storm itself."

He said he hopes Floridians have a better understanding how to prepare for the next hurricane.

"The better we can inform the public and get the public prepared for this the next time it happens – and there will be a next time. There always is. so that we're ready. we learn our lessons from this one and we can move forward."