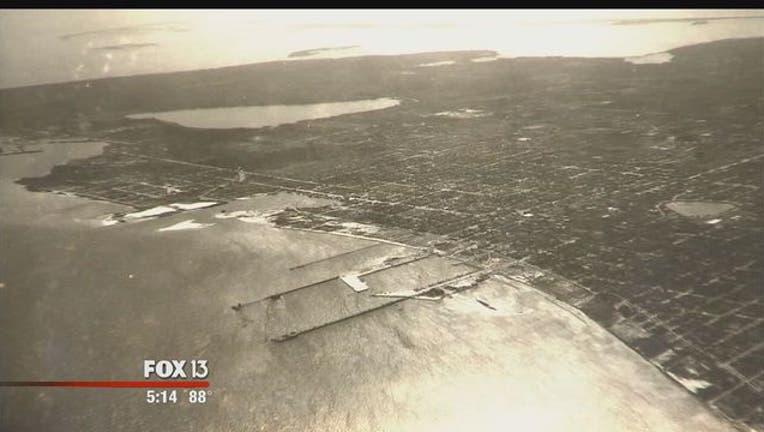 A mother's scrapbook and a pilot's aerial photographs provide new insight into early St. Petersburg and one of its best known names: Albert Whitted, the namesake of downtown's airport.

"Albert Whitted took those photographs," museum archivist Marta Jones told FOX 13 News. "I'm going to go with that theory because he was the pilot so, it's either him or somebody was able to squeeze in that airplane because they didn't have a lot of room for passengers."

Some of the clippings saved by his mother detail his death in a 1923 plane crash outside Pensacola.

Articles on other accomplishments were also assembled with a mother's care "...which is good," Jones said. "It paints more of a picture, gives more of a provenance."

One of the aerials must have been taken only months before Whitted's death.

"This park was first used by the Boston Braves in '22," museum historian Nevin Sitler said, pointing to Al Lang Field's original location, "And we know he died in '23."

Sitler's favorite must have been taken a couple of years earlier.

A deadly hurricane in 1921 removed one of the piers forever.

Referring to one particular photo looking north, Sitler commented, "If indeed these are images taken by Albert Whitted, kind of neat that he captured where an airport would go and be named after him- because essentially it would be right here."

The material came from Ann Field, Whitted's granddaughter, who now lives in California. The museum expects to receive more material from her. Much of it will be scanned into computers at high resolutions to make it available to other history researchers.