This footage, released by the sheriff's office, shows the red Nissan Juke that deputies say hit a family of five as they crossed Gulf Boulevard in St. Pete Beach. The suspect vehicle is partially obscured by a bus.

ST. PETE BEACH, Fla. - Deputies in Pinellas County are hoping you can help them find the driver who killed a pedestrian last night in St. Pete Beach and left four others injured.

According to the sheriff’s office, it was around 9 p.m. Thursday when a family of five was crossing at the 4400 block of Gulf Boulevard in the crosswalk. A red Nissan Juke pulled out of the beach parking lot there and turned northbound.

The SUV struck all five people in the crosswalk, then drove off northbound. Surveillance footage provided by the sheriff's office shows the vehicle slowing briefly, then accelerating away.

"We saw two people on the ground," one witness told FOX 13 News. "That’s saddening.  We have so much going on in our country right now, humanity is one thing we have to have in our souls." 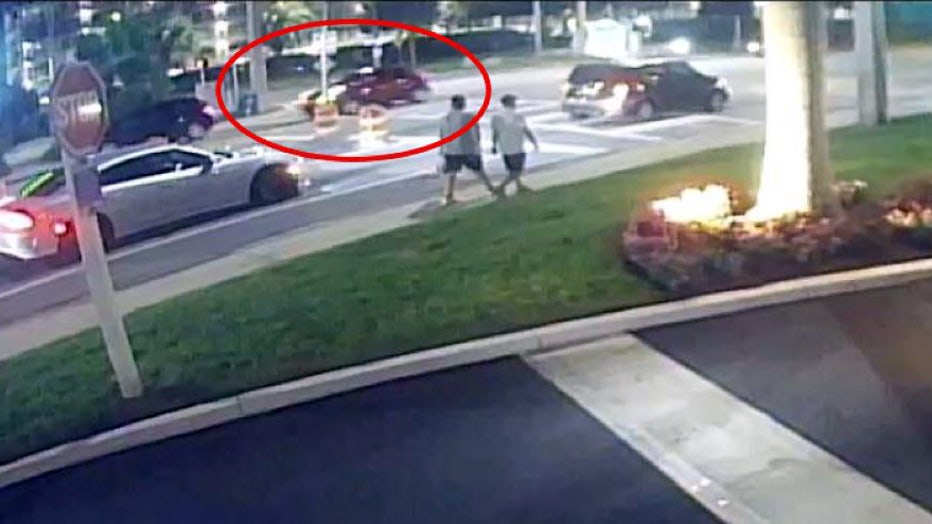 Deputies describe the suspect vehicle as a "newer model" red Nissan Juke with alloy rims. There was no description provided of the driver or any passengers.

"We want them to turn themselves in, absolutely that’s what we want," said Pinellas County Sheriff’s Office spokesperson Travis Sibley.  "You have five people crossing the road, enjoying themselves, and one of their family members lost their life.  The person that was driving, they need to be an adult and turn themselves in."

Investigators ask anyone with information on the crash to contact Corporal Jon Dobson at (727) 580-4505 or by email at jdobsonjr@pcsonet.com.