One homeowner had part of her roof ripped off her house after an EF-0 tornado touched down in her Seminole neighborhood.

SEMINOLE, Fla. - The National Weather Service confirmed that storm damage in Seminole is consistent with an EF-0 tornado, which has maximum winds of 70 miles per hour.

Luke Bueller took video of a tree that caught fire in his neighborhood, possibly due to downed power lines.

12 Oaks Mobile Home Park on Park Boulevard remained flooded for a majority of the overnight hours on Friday. Wind picked up several roofs, pieces of siding, and insulation that could be seen strewn across the property.

A homeowner on Temple Terrace Road seemed to be right in the path of the twister Friday night.

"I only slept for about two hours," said one homeowner, who only wanted to be identified as Melissa. "I was a little bit nervous and a little bit overwhelmed about what's in store for today."

The Seminole homeowner woke up to a missing carport, porch cover, and parts of her roof that had been blown off and into her neighbors yard. 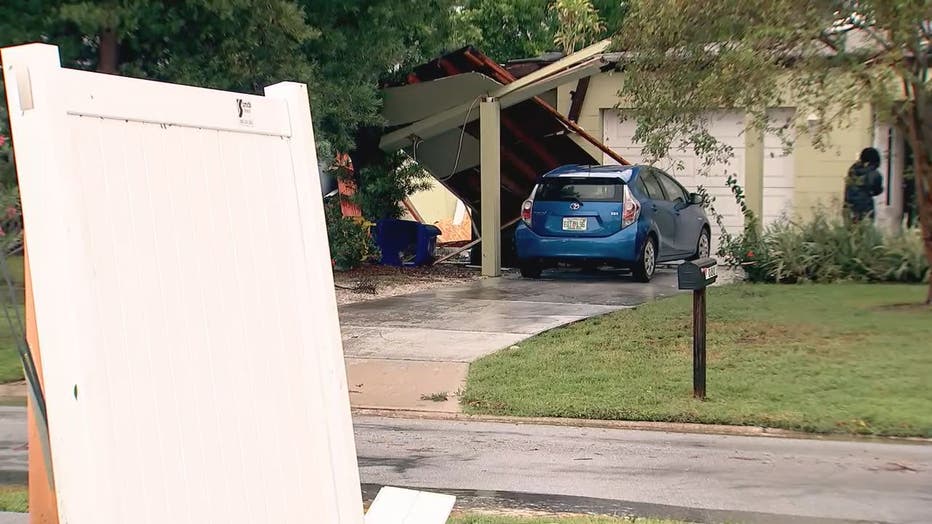 "A broken roof, it's raining in my house," Melissa listed. "The porch and the cover for the car are blown into my neighbors yard and there's some damage to furniture and stuff."

She says she is thankful for her neighbors who checked on her, and let her stay the night when Duke Energy turned off her power.

The city sent inspectors to the area today to assess damage in the area.