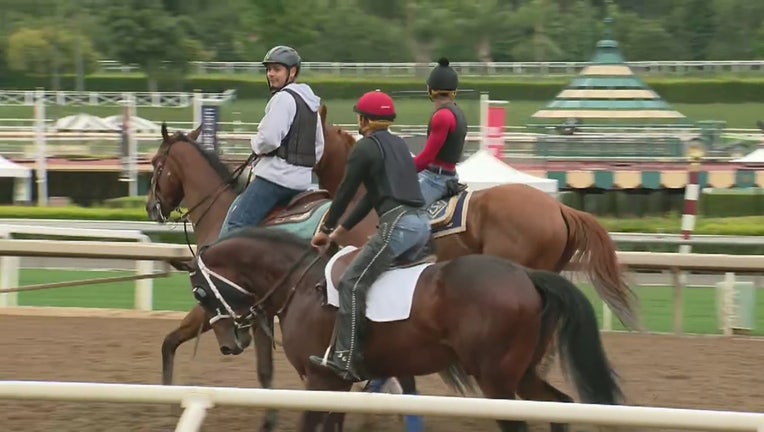 ARCADIA, Calif. - A 6-year-old mare named GQ Covergirl has become the 35th horse to die at Santa Anita Park since the start of its winter/spring meet
on Dec. 26.

Exercise rider Amir Cedeno was "physically OK but emotionally bruised,'' according to a statement from the racing stable of Doug O'Neill
after the horse was euthanized Friday, who trained GQ Covergirl.

"Team O'Neill deeply feels the loss of this wonderful mare,'' the statement said.

GQ Covergirl will undergo a necropsy at the University of California Davis School of Veterinary Medicine on behalf of the California Horse Racing Board, as required for all on-track deaths. The necropsy report will be used to determine what, if anything, could have prevented the horse's injury.

The death was the third during Santa Anita Park's fall meet, which began Sept. 27. Satchel Paige, a 3-year-old gelding was euthanized after breaking his left front ankle during a race last Saturday. The 5-year-old gelding Ky. Colonel collapsed and died from an apparent heart attack jogging on the inner training track Oct. 6.

The California Horse Racing Board announced Thursday it will issue a report in December on the racing and training fatalities during Santa Anita Park's winter/spring seasons that could provide strategies to avoid similar equine injuries.

Veterinary personal, safety stewards and others involved in track safety have been accumulating and analyzing the information to come to an understanding of how each death occurred in order to identify any common characteristics or causes and develop strategies for preventing similar injuries in the future, according to Mike Marten, the public information officer for the California Horse Racing Board.

Board investigators have issued more than 120 subpoenas for records and are continuing to review all cases for any CHRB rule or criminal violations, Marten said. The Los Angeles County District Attorney's Office has undertaken a parallel investigation.