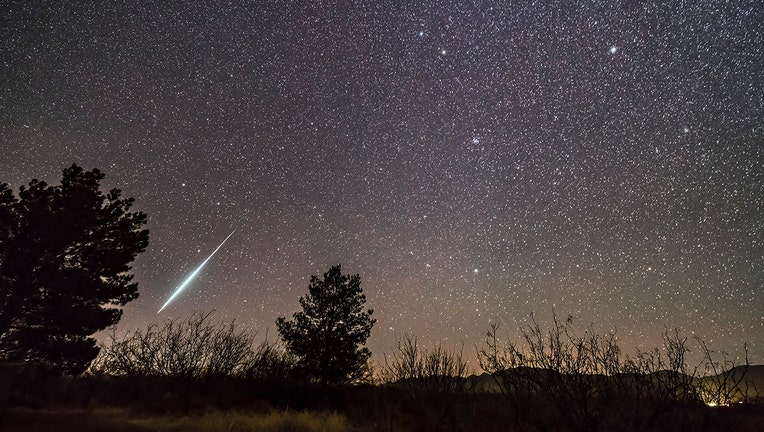 A single bright meteor from the Geminid meteor shower of December 2017.

PHILADELPHIA - If you’re outside overnight, look up.  You might see a shooting star!

Every December, the Earth runs into asteroid dust.

The dust, often the size of a grain of sand, add energy to the air way up in our sky.  We’re talking about the air that’s like 50 to 80 miles above us.

Now, nothing is actually burning up.  You’re just seeing air give off a glow of light.

Instead, the rock dust ends up disappearing into thin air, quite literally.

Already super tiny to begin with, air resistance helps those specks of asteroid break up more and more as they fall.  That air resistance (friction) also heats up those tiny rock pieces.  Eventually, the pieces get warm enough that they vaporize: the become so tiny, they’re considered a gas.

Learn more about comets, meteors, and meteorites from NASA.

You’ll see shooting stars for about two weeks before and after a meteor shower, but they’ll be pretty infrequent unless it’s the night of peak.

The Geminid Meteor Shower peaks at 2 a.m. Tuesday morning, but the best time to head out is from 3-6 a.m.  Here’s why: there won’t be moonlight then.

Moonlight is the enemy of a meteor shower because they’re easier to spot when the skies are completely dark.  The moon will set around 2 a.m., so it’ll be pretty dark by 3 AM.

Look east for the meteor shower.