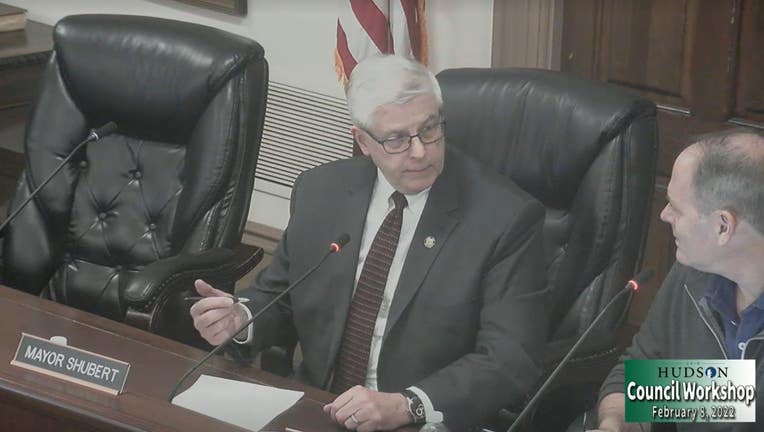 HUDSON, Ohio - The mayor of a suburban Ohio city garnered attention this week after suggesting that allowing ice fishing at a city park could eventually lead to ice shanties — or a portable type of shed for shelter on the ice — which in turn could prompt another issue: prostitution.

Mayor Craig Shubert of Hudson, Ohio, a suburb located about 30 miles outside of Cleveland, made the comments Tuesday during a city council meeting, which have been widely shared online. Officials were having a discussion on whether to allow ice fishing at Hudson Springs Park after it was requested by some residents.

Ice fishing is currently prohibited at the park, according to Cleveland.com.

After several minutes of discussion about the safety and liability of potentially allowing the activity, Shubert raised a different concern for the council to consider.

"If you open this up to ice fishing, which while on the surface, it sounds good, then what happens next year? Does someone come back and say, 'I want an ice shanty in Hudson Springs Park for X amount of time?'" Shubert stated. "And if you then allow ice fishing with shanties, then that leads to another problem: prostitution. And now you have the police chief of the police department involved."

"Just some data points to consider," he added.

Council President Chris Foster, who was sitting next to Shubert, appeared somewhat surprised by the mayor’s statement.

None of the council members directly addressed his comment about prostitution. But council member Chris Banweg quipped, "I’m not in favor of ice shanties," which prompted some laughter from colleagues in the room.

Hudson City Council did not take any action following the discussion on whether to allow ice fishing or ice shanties in the community, according to local news outlets.

Schubert’s office did not immediately reply to a request for comment. But in a statement to FOX 8, he said his comments stemmed from previous experience as a news reporter.

"My comment about ice fishing, the permitting of shanties on lakes, and prostitution stems from my experience as a former television news reporter covering law enforcement agencies, which have made arrests for acts of prostitution in ice fishing shanties," the statement reads. "When discussing proposed legislation, it is wise to discuss the potential for unintended consequences. My statement was to enlighten council that the future permitting of ice shanties may lead to other issues."

Shubert also made national headlines in 2021 when he said the city’s entire school board should resign or face criminal charges over a book in a college-level class at Hudson High School that he called "child pornography," according to local news outlets.

The book, "642 Things to Write About," had been used in the district for several years prior to the controversy, according to the Akron Beacon Journal. But in the fall, some parents complained about the content of some writing prompts in the book, which included: "write a sex scene you wouldn’t show your mom" and "describe a time when you wanted to orgasm but couldn’t," the newspaper reported.

The district superintendent said the "inappropriate and offensive writing prompts" were part of a supplemental resource used in the high school senior-level College Credit Plus writing sections, and the books were soon collected from students enrolled in the course.

"It is important to note that at no time were any of these inappropriate writing prompts assigned as part of the class," Superintendent Phil Herman said in a statement at the time, according to the newspaper.

But the school board members received violent threats, according to the Summit County Prosecutor Sherri Bevan Walsh’s office. Bevan Walsh concluded that the writing prompts did not amount to child pornography.

The office also explored whether Shubert could face charges for disrupting a public meeting and inciting panic over the threats to public officials that followed, Cleveland.com reported. Ultimately, he was not charged.