Biden on new COVID-19 rules as omicron variant reaches US

President Joe Bidden addressed the arrival of the omicron variant in the United States and what that means for safety protocols.

More than 700 flights entering, leaving or flying within the U.S. were called off, according to the flight-tracking website FlightAware. That figure was down from nearly 1,000 on Saturday. More than 50 flights were already canceled for Monday.

Delta, United and JetBlue have blamed the omicron variant of the coronavirus for staffing shortages that forced cancellations.

"This was unexpected," United spokesperson Maddie King said of omicron’s impact on staffing.

Globally, airlines scrapped about 2,200 flights as of Sunday morning, down from more than 2,800 from the day before, FlightAware’s data showed. The site does not say why flights are canceled.

RELATED: Christmas flight canceled? Here’s how to get a refund

JetBlue scrapped 10% of its flights Sunday. Delta canceled 5% and United canceled 4%, according to FlightAware. The three airlines canceled more than 10% of their scheduled flights on Saturday.

In other pandemic developments, the nation's second Christmas in the shadow of COVID-19 sharply lifted holiday sales, which rose at the fastest pace in 17 years, even as shoppers grappled with higher prices, product shortages and the omicron variant in the last few weeks of the season, according to one spending measure.

Mastercard Spending Pulse, which tracks all kinds of payments including cash and debit cards, reported Sunday that holiday sales had risen 8.5% from a year earlier. Mastercard SpendingPulse had expected a 7.4% increase. 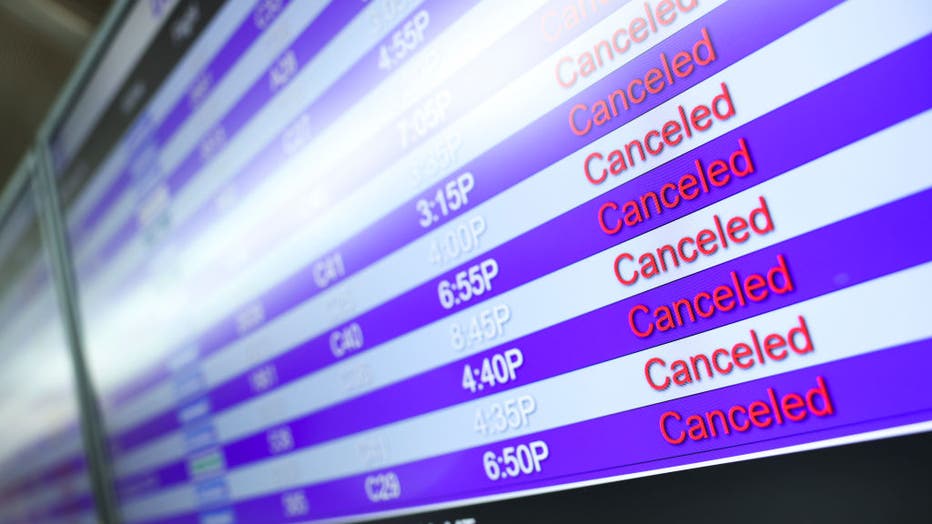 A display board shows canceled flights at Denver International Airport on March 13, 2021 in Denver, Colorado. (Photo by Michael Ciaglo/Getty Images)

The results, which covered Nov. 1 through Dec. 24, were fueled by purchases of clothing and jewelry. Holiday sales were up 10.7% compared with the pre-pandemic 2019 holiday period.

Also Sunday, the nation’s top infectious disease doctor acknowledged that he was frustrated with the limited supply of COVID-19 tests.

Demand for tests has risen amid the surge fueled by the omicron variant. "We’ve obviously got to do better," Dr. Anthony Fauci said an interview that aired Sunday on ABC’s "This Week."

"I think things will improve greatly as we get into January, but that doesn’t help us today and tomorrow," Fauci said.

Fauci said he was pleased with evidence that omicron causes less severe illness for most people. But he warned against complacency because the rapid spread of the disease could "override a real diminution in severity," because so many more people could get infected.

Meanwhile in Europe, France recorded more than 100,000 virus infections in a single day for the first time in the pandemic. COVID-19 hospitalizations have doubled over the past month as omicron complicates the French government’s efforts to stave off a new lockdown.

More than 1 in 100 people in the Paris region have tested positive in the past week, according to the regional health service. Most new infections are linked to omicron, which government experts predict will be dominant in France in the coming days. Omicron is already dominant in Britain, right across the English Channel.

President Emmanuel Macron’s government planned emergency meetings for Monday to discuss the next steps. Some scientists and educators have urged delaying the post-holiday return to school or suggested re-imposing a curfew.