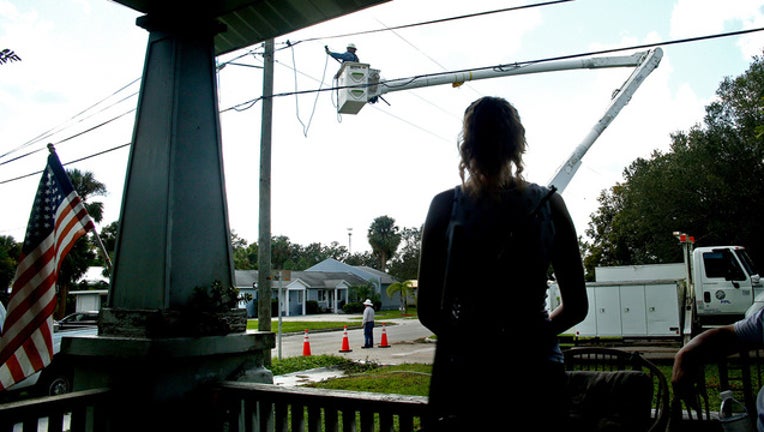 An Arcadia, Florida resident watches from the porch as a crew from Florida Power & Light, Co. works to repair a power line in the wake of Hurricane Irma. (Photo by Brian Blanco/Getty Images)

TALLAHASSEE (NSF) - Florida Power & Light will seek to recoup an estimated $1.3 billion from customers to cover the costs of restoring electricity after Hurricane Irma barreled through the state last month, the utility said Thursday.

The costs would start showing up in customers' bills in March --- just as they get done paying off costs from Hurricane Matthew in 2016. If the new plan is approved by the state Public Service Commission, FPL customers would continue paying Irma costs through 2020.

“FPL's storm reserve fund was fully depleted by hurricanes Hermine and Matthew last year, and as with most states across the U.S., the costs of responding to major natural disasters are not covered by the regular rates paid by electric customers in Florida,” FPL spokesman David McDermitt said in an email Thursday. “We understand that no one wants to pay more for energy or any other service, and we plan to request permission from the Florida Public Service Commission to recover Hurricane Irma recovery costs over the next few years to keep the impact on electric rates more manageable for FPL customers.”

The proposal comes as legislative committees and the Public Service Commission begin looking at hurricane preparedness and restoration issues after Irma knocked out electricity to millions of Florida homes and businesses.

But those reviews are unlikely to affect FPL's ability to recoup hurricane costs from customers. A rate agreement approved last year by the Public Service Commission makes clear that the utility is able to recover costs of restoring power after hurricanes.

Irma was significantly more expensive for FPL than Hurricane Matthew, which hammered parts of the East Coast in 2016, though it never made landfall in the state.

The Public Service Commission in February approved a request from FPL to recover $318.5 million in costs related to Matthew.

FPL, the state's largest utility, began collecting the Matthew costs in March and is expected to finish in February 2018. For a residential customer who uses 1,000 kilowatt hours of electricity a month, Matthew has added $3.36 to monthly bills.

Under the new proposal, that same FPL customer would start paying $4 a month in Irma charges in March 2018 --- effectively seeing a 64-cent increase because of the end of the Matthew charges in February, according to the utility. The monthly amount would increase to about $5.50 in 2019, with the storm costs expected to be paid off by the end of 2020.

The utility industry commonly uses a 1,000-kilowatt-hour residential bill as a measuring stick. But many residential customers use more power than that each month, and rate impacts on businesses are measured differently.

A formal request to recover the Irma costs had not been posted on the Public Service Commission website as of Thursday morning.