A homeowner watched in disbelief as her home was ripped apart as SWAT team members tried to reach a triple murder suspect. She said she took in 35-year-old Stanley Eric Mossburg after he said he just got out of jail, which wasn't true, and needed help.

WINTER HAVEN, Fla. - An hours-long standoff came to an end after the man accused of killing at least three people, including two in Winter Haven, was finally arrested after Polk County deputies cornered him inside a home.

The suspect, 35-year-old Stanley Eric Mossburg, also known as “Woo Woo,” was taken into custody just after 5 a.m. Tuesday by the sheriff’s office SWAT team. Officials said he was barricaded in a home on Avenue C NE near 16th Street NE. They said he was alone, and the home belonged to someone he met just a few days before his arrest.

But his violent spree started on October 1 in Tennessee, and Polk County Sheriff Grady Judd gave the following preliminary timeline from Mossburg's first alleged murder to his arrest in Winter Haven:

Judd said a man was inside a Greenville laundromat by himself around 11 p.m. Video surveillance showed a white male, later identified as Mossburg, enter. He pulled a gun and forced the victim into a bathroom. Four minutes later, both exited. The victim's hands and arms were bound against his body and Mossburg was holding a gun.

The suspect picked up the victim's cell phone, and followed the victim out of the laundromat -- and out of view. The victim's wife became conerned when he didn't return home, and texted him. She received a response from her husband's cell phone that is "very vile, ugly, nasty," Judd described. The wife called 911 and police arrived at the laundromat, but they didn't see anything suspicious.

At this point, the victim's car was gone.

Around 7 a.m., customers started showing up at the laundromat. It was hot inside, Judd said, so they open the back door and find the victim in a pool of blood. At this time, the victim's car is reported stolen, a Buick LeSabre.

On this day, Mossburg arrived in his hometown, Spartanburg, South Carolina. His sister purchased him a bus ticket because he wanted to go to Orlando. Judd said it's unclear what connection the suspect had to any part of Florida. She drove him to Atlanta where he got on the bus.

Spartanburg police said they received surveillance video showing the suspect, which alerted them that Mossburg returned to their area. They alerted police in Tennessee.

Police found the Tennessee's victim's car at a scrap yard.

It wasn't until Monday night, when Polk County deputies discovered Mossburg stole a black F250 dually truck on October 9 in Seffner. It's unclear how he traveled from Orlando to Seffner.

October 11: Mossburg is in Florida

Polk County officials learned Mossberg was in the area. They received word that he pawned property at an Auburndale pawn shop. A BOLO was issued.

Around 4 p.m., Judd said Mossburg was seen in Ring video on 16th Street NE in Winter Haven. Ring notified the owner that someone was outside. The owner headed out, confronted Mossburg and told him to leave. Mossberg left.

By 10:30 p.m., a male -- who Judd referred to as the "live victim" -- arrived home, where he lived with two roommates, a male and a female. Judd said he heard his female roommate say, "Do what he says, and he won't hurt you."

Mossburg approached the male, and explained he had guns and knives, and will kill him if he resists. Mossburg took the live victim through the home, and, at one point, he saw his female roommate tied to a chair. Mossburg told the live victim not to look inside the master bedroom, "because you won't like what you see in there." Judd said the male roommate was dead inside the room.

Stanley 'Woo Woo' Mossburg says a war is coming between demons and angels, but he's on God's side.

The live victim was tied up in the office space, and Mossberg demanded money and valuables. He explained that the male victim in the master bedroom tried to "fight back," so Mossberg made him suffer before killing him, Judd said.

At one point, Mossburg left the live victim, and later returned to tell him he killed the female roommate.

Mossburg poured bleach on the victims, got a mop bucket, and started mopping the floors. 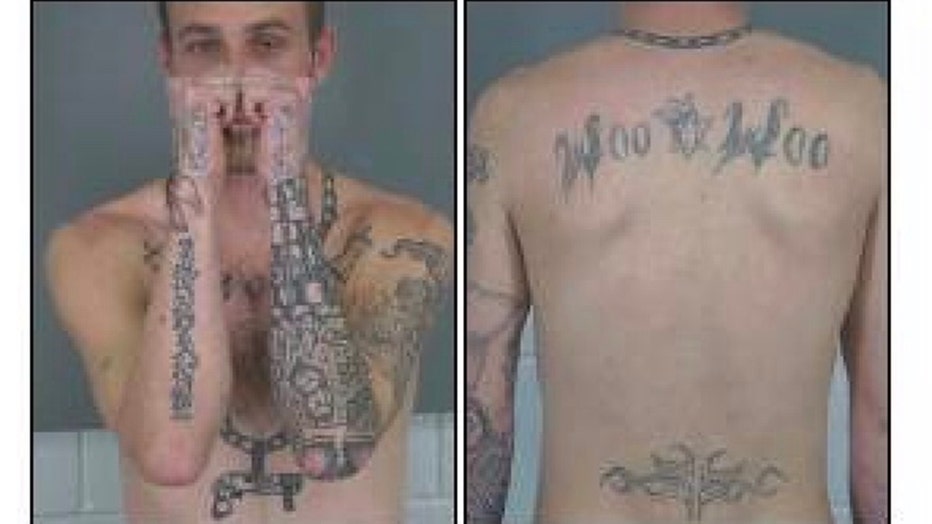 At sunrise, Judd said the live victim was still cooperating with the suspect. Mossburg untied the live victim, and allowed him to sit in the living room. He asked Mossburg to turn up the A/C, but Mossburg said he wanted to keep the home cool so "these victims don't start to smell."

Mossburg begins loading up stolen property inside the female victim's car. At noon, before he left, he told the live victim he will be back for the bodies, and threatened to kill him if he called police. The live victim stayed on the couch until 6 p.m. He ran to his neighbor's home and called 911.

Numerous deputies arrived in the neighborhood, and a captain noticed the female victim's car was less than two blocks from the murder scene.

"Did you hear me? The guy drove back within a block and a half of the murder scene, and there’s 50 deputies in the area," Judd described, saying the vehicle was not there "two minutes" before its discovery. Soon after, deputies located the stolen F250, spray-painted white.

A perimeter was set up, and witnesses told deputies Mossburg went through the backyard of a home. When deputies entered, and tried to pry open a door, shots were fired from the other end. They retreated, and a SWAT team was requested.

Officials introduced a chemical agent, poked holes through the residence, and introduced even more chemicals. Judd said Mossburg fired up to 8 bullets. The SWAT team knocked down the garage door, and inside, they saw a pool table with Mossburg underneath it.

The pool table was lifted, it broke and fell down. A K9 was deployed, and Mossburg grabbed the K9 with both hands. The SWAT team entered and took him into custody.

The siding of the home appeared to have been torn off during the standoff as SWAT team members ripped windows, doors and other openings to reach him. The homeowner, Elizabeth Wolf, looked on with disbelief. She told FOX 13 that she and her husband took Mossburg in because he told them he was just released from jail, and needed their help getting back on his feet.

Deputies said that was a lie.

"He didn't tell us a whole lot. He seemed nice enough. He gave us some money for helping," Wolf explained.

She said on Monday night, he came home and seemed nervous. He entered her bedroom and showed her his gun. She asked him if he was going to shoot her, and she said he wouldn't. After, she looked out her window and noticed police lights.

"So I said, ‘I want to go see why the police are out there,'" Wolf recalled. "He said, ‘yeah they’re probably here for me.’" 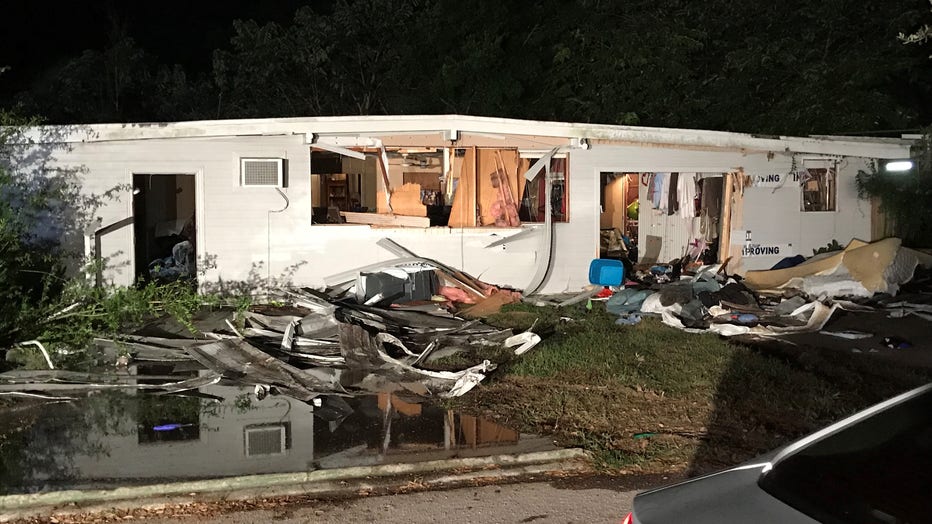 Polk County deputies say this is the home where Stanley Mossburg barricaded himself.

A neighbor, Stephen Wilkins, told FOX 13, he heard a lot of commotion as the sheriff's office SWAT team closed in on Mossburg. He said he heard what sounded like "flash bangs."

"[I was] definitely kind of nervous knowing there was a murder suspect in the area. I felt safe when [deputies] arrived," he explained. "I didn't get a lot of sleep."

Stanley Eric Mossburg is accused of murders in Polk County and in Tennessee, but was arrested after barricading himself inside a home in Winter Haven. A neighbor, Stephen Wilkins, same he was nervous knowing there was a murder suspect nearby, but felt safe when deputies arrived.

At the end of Tuesday morning's press conference, Judd said Mossburg had mainly non-violent charges in his past.

"We spoke to our live victim. He said, 'Oh, by the way. This guy said he wants to be a serial killer. I like killing people,'" he said.

Mossburg allegedly said he killed eight people, but Judd said there is no evidence, at this time, of other murders.

"This guy has a history of stealing vehicles," Judd said. "Once again, I'm not going let the people who try to tell us that low-level, non-violent offenders shouldn't be locked up and we're too tough on them. The overwhelming majority of the more than 30 charges...against Stanley Eric Mossburg are non-violent charges."

"Here's your sign legislators, when you start talking to me about low-level, non-violent crimes, gag me with a spoon. That's BS."

You can view the full press conference with Sheriff Grady Judd below: