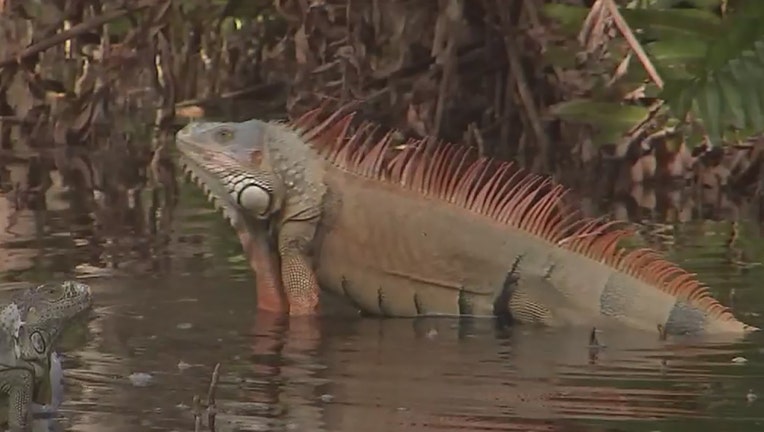 MIAMI - Hundreds of thousands of unwanted visitors are invading Florida homes and public areas. While these green iguanas seem to be enjoying the sun, residents are comparing their takeover to "Jurassic Park."

"My daughter was home visiting school in the summertime and she took out her camera and literally played the [theme to] 'Jurassic Park' and started videotaping as they were approaching the greens … they will just go running, and you see what looks like little dinosaurs running away from you," Dawn Braeseke, the general manager of Cooper Colony Golf and Country Club, said.

Braeseke said she spends hundreds of dollars each year trying to control the herd of invasive iguanas littering her property.

"Here on my property, we're having an issue with some of our pavement being deteriorated by the iguanas that try to burrow underneath the bridges. My sand traps … what used to be kind of fun to see one or two, when you see hundreds a day as you're driving around our golf course, yeah, that's just not fun anymore," Braeseke said.

The iguanas are not native to Florida, but they have been present in the state for at least six decades. Scientists believe they were first shipped as pets from their native habitats in the Caribbean, as well as Central and South America. According to the Florida Fish and Wildlife Conservation Commission (FWC), the iguanas can weigh up to 17 pounds and grow to more than five feet in length. They also have a relatively long life expectancy, surviving for up to 10 years in the wild and 19 years in captivity.

Viral videos show the problem taking on a life of its own, as iguanas are seen battling each other in plain sight on the streets and showing up unannounced in people's toilets. The problem has gotten so bad, the FWC encourages residents to kill the green iguanas on their properties when possible, or better yet, ask the professionals to do it.

"We've had instances where we've removed them off of people's barrel tile roofs. They're in their attics. We get calls frequently for them falling into people's toilets, digging underneath homes foundation, defecating by a pool… I have lived in Florida my whole life and I have never seen it this bad," Perry Colato, the co-owner of Redline Iguana Removal, said.

Colato said iguana removal experts use special equipment to capture up to 100 iguanas each day.

Related: Photo of bobcat preying on full-grown iguana because this is Florida

Biologists say the Florida heat provides the perfect conditions for the iguanas to thrive.

"Since then, they've kind of slowly grown," he added. "In 2010 we had a pretty long freeze event [that] lasted almost a week or so. That killed off a lot of the iguanas, a lot of the exotic animals… because we have not had as cold events as in 2010, on a less frequent basis, we're starting to see more and more iguanas pop up because they don't have that pushback of cold weather to kind of kill off the population," Metcalf explained. 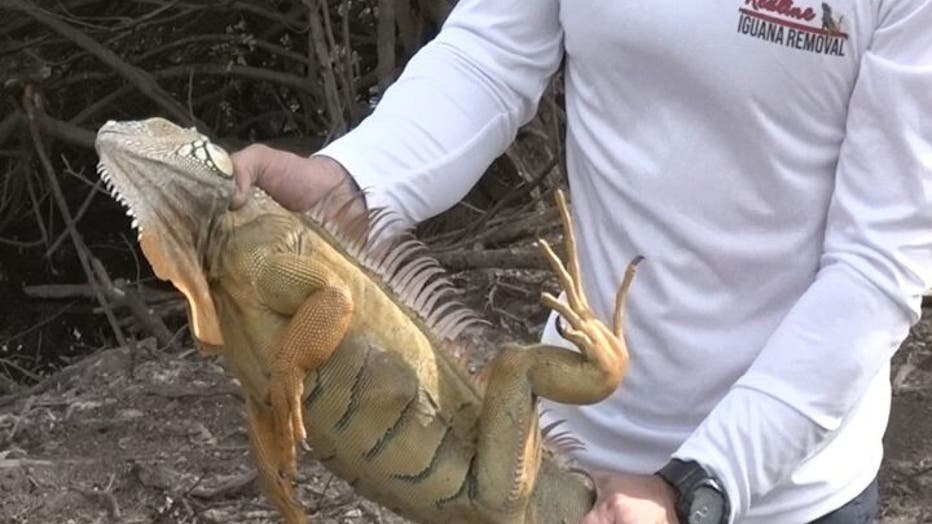 "With nothing really to limit their population, they're exploding exponentially," Colato added.

Braeseke said while some may consider it a heartless act, there are so many green iguanas around that it is affecting her personal life and her business.

"They don't belong in South Florida, they are not native to this area. It does not make us bad that we need to get rid of them, people need to understand that," Braeseke said.