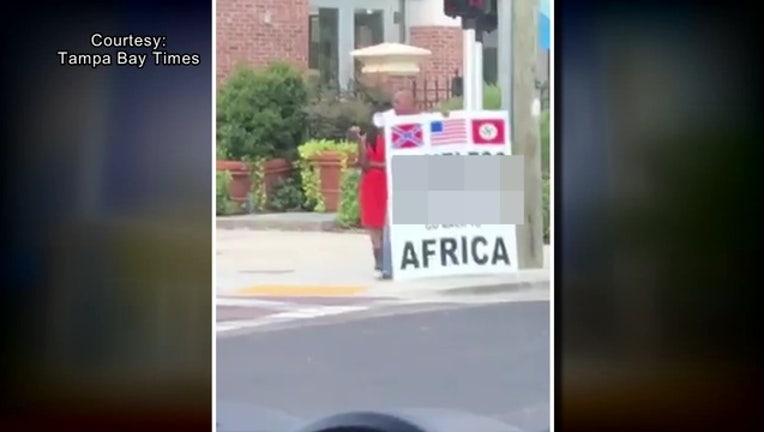 TAMPA (FOX 13) - Tony Daniel is usually spotted in downtown Tampa holding up provocative signs with racial slurs as a protest against a variety of businesses and public officials. But he got into hot water this summer when two women tried to snatch his sign.

In cell phone video, Daniel can be seen beating two women with a megaphone. However, he does not stop there; he continues striking the women as they head towards their car.

Daniel – who had previously told the Tampa Bay Times he was being targeted by the city because of building permit and other issues – was later arrested and charged with battery.

Now, in new court documents, Daniel plans to use Florida's controversial Stand your Ground Law to win immunity. He claims the women violently attacked him and he had no choice but to defend himself.

Under the Stand your Ground Law, there is no obligation to retreat if someone is faced with violence or the threat of great bodily harm. They can meet force with force.

In August, Daniel's public defender, Mary Dunker, suggested investigators may have targeted him and now they want detective’s notes, cell phone records, and text messages to prove it.

"It's not just evidence; it’s also impeachment evidence, it’s also evidence of bias that is potentially useful for the defense in this particular phase in defending Mr. Daniel," said Dunker.

While that evidence could help bolster his case, Daniel believes the Stand your Ground Law itself will help him win immunity from criminal charges.