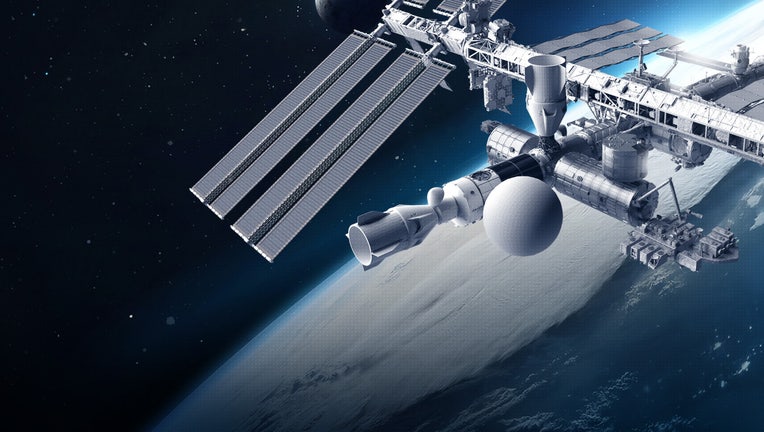 An artist's rendering of the SEE-1 entertainment module in space. (Image: SEE)

The International Space Station will be getting an upgrade to the orbiting laboratory in the form of an inflatable media studio and arena after an entertainment company selected Axiom Space to manufacture a new module.

While an entertainment venue in space may sound far-fetched, Houston-based Axiom Space already has its foot in the door, or hatch, at the ISS.

Axiom Space also plans to build a space station. It will launch modules to attach to the current ISS until it's ready to separate and operate as an independent facility in low-Earth orbit.

NASA has also given Axiom approval to begin launching paying customers to the ISS starting this year. The first launch known as Axiom-1 is scheduled no earlier than March. A second launch, Axiom-2, could launch late in 2022 or early 2023. The civilian crew will arrive at the ISS after embarking on a SpaceX Cargo Dragon spacecraft from Kennedy Space Center in Florida.

In the latest move for Axiom, a UK-based company called Space Entertainment Enterprise or SEE has contracted the spaceflight company to create a media venue attached to the ISS. The manufactured module called SEE-1 could launch and connect to Axiom's module at the ISS by the end of 2024.

Co-founded by film producers Elena and Dmitry Lesnevsky, SEE is also behind the movie with actor Tom Cruise that will be partially filmed in space.

An artist's rendering of the SEE-1 entertainment module in space. (Image: SEE)

According to SEE, the module will be open to artists, producers and creatives to develop content from movies to sports events.

"It will provide a unique and accessible home for boundless entertainment possibilities in a venue packed with innovative infrastructure which will unleash a new world of creativity," Dmitry and Elena Lesnevsky said in a news release. "With worldwide leader Axiom Space building this cutting-edge, revolutionary facility, SEE-1 will provide not only the first but also the supreme quality space structure enabling the expansion of the $2 trillion global entertainment industry into low-Earth orbit."

This won't be the first inflatable room added to the ISS. The space station currently has the Bigelow Expandable Activity Module, known as BEAM, which was a technology demonstration that NASA decided to keep on after a two-year test period.

SEE-1 will make up one-fifth of Axiom's space station when it's ready to separate from the ISS. The first module of the Axiom Station is currently under construction by Thales Alenia Space and is expected to launch in 2024.

"Axiom Station, the world's first commercial space station, is designed as the foundational infrastructure enabling a diverse economy in orbit," Axiom CEO Michael Suﬀredini said in a statement. "Adding a dedicated entertainment venue to Axiom Station's commercial capabilities in the form of SEE-1 will expand the station's utility as a platform for a global user base and highlight the range of opportunities the new space economy offers."

According to the latest timeline, Axiom plans to launch one module a year between 2024 and 2028.

LINK: Get updates on this story from FOXweather.com