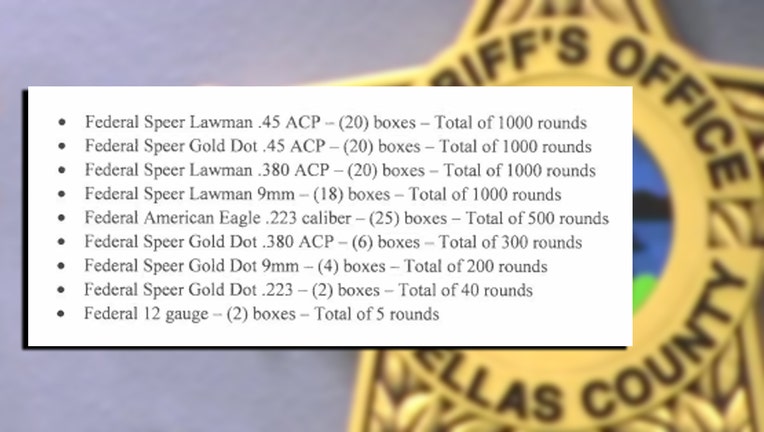 List of ammunition checked out by Bryan Bingham, as documented in Pinellas SO report

LARGO, Fla. - A sergeant with the Pinellas County Sheriff’s Office has been demoted after an internal investigation found he violated agency policy by using his position to remove over 5,000 rounds of ammunition for personal use.

According to an internal report, Bryan Bingham was participating in training exercises at the sheriff’s shooting range when he asked if practice ammunition was still being issued to employees for training.

A supervisor at the range told Bingham that it was allowed "within reason, depending on what it is," according to records obtained by FOX 13 News.

The sheriff's office says Bingham never asked, nor was he authorized to obtain a specific amount of ammunition.

Later that day Bingham reportedly told two employees, including a training corporal who was called to verify the legitimacy of the request because it was so large, that he had approval from the supervisor.

The sheriff's office investigation shows that after receiving the ammunition, Bingham had to use a handcart to transport the items to his agency vehicle before driving them home and storing them in his garage.

Bingham testified later at a hearing that he planned to use the ammunition for "personal training" at a family-owned location, out of state, and admitted that "in the grand scheme of things, it was too much."

The review board found that Bingham used his position of authority as a sergeant to obtain an "excessive" amount of ammunition that would not be issued for personal use.

Bingham was demoted to the rank of deputy on Tuesday.