Current wave of COVID cases could peak this month

TAMPA, Fla. - It's been 37 days since the omicron variant of the coronavirus was first identified. In that relatively short amount of time, cases have gone up almost eightfold.

However, the recent spike in cases comes at the end of the pandemic's second year, prompting everyone to ask when this wave will crest and fall.

A look at the overall picture of US cases shows four long-lasting, rolling waves, including one last January and another over three summer months, driven by the delta variant and butting up against the omicron surge. 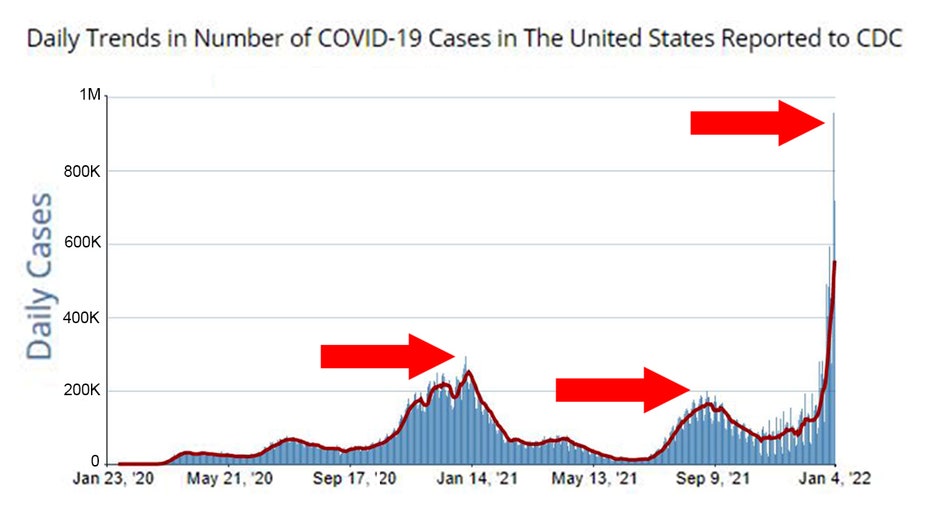 READ: ‘Flurona’: What you need to know about the flu, COVID-19 dual illness

"People are spending more time indoors, and that further enables the virus to move from person to person," said Dr. Jeffrey Shaman of Columbia University, a professor of environmental health sciences.

Omicron was first identified in South Africa, but looking there for guidance on when the surge will end may be fools gold.

School districts in Tampa Bay are feeling the staffing crunch fueled by a surge in COVID-19, with more than 1,000 positions in Hillsborough County Schools needing to be filled Wednesday.

Their cases went up 42-fold over 26 days and have dropped over the last 18 days, nearly as quickly.

Though the South African population is vaccinated at a lower rate than the US, the population is also much smaller and younger. The country is also in the middle of its summer season.

Dr. Shaman projects the US will see its peak of new cases during the week of January 16, when the daily average will near 750,000.

"In some locations, it's quite possible it will crash down to very low levels," said Shaman. "However, we are a big country. Is this virus going to get to all locations at the same time?"

Dr. Michael Teng of USF Health says the main hope, from his perspective, is for the next variant to develop from omicron, as opposed to the original strain, because omicron appears less deadly than its predecessors.

"Once we get to a point where we start to see variants derived from variants, so something from delta or omicron, then mutates to become something else, that's where we will see evolution of the virus," Teng said.

Human behavior remains the constant variable impacting the severity of the virus' spread. The percentage of people vaccinated, how many kids are in school, and other big gatherings can all impact when the crest will hit.