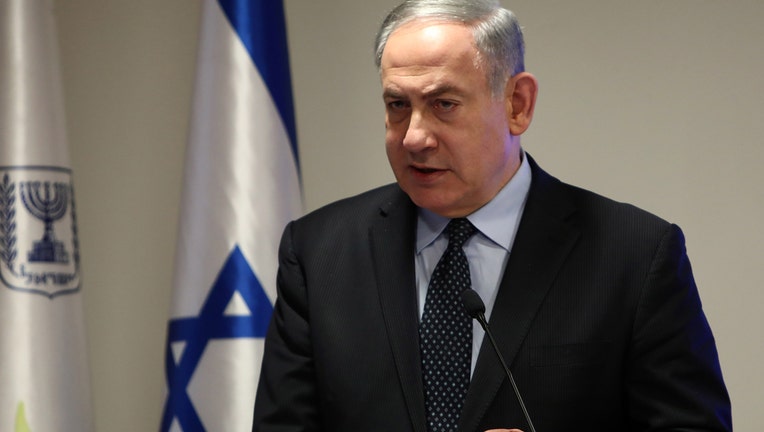 Prime Minister Benjamin Netanyahu speaks during a joint press conference with Israel's health minister regarding preparations and new regulations for the coronavirus, at the Health Ministry in Jerusalem on March 4, 2020. (Photo by GALI TIBBON/AFP via

TEL AVIV, Israel - Israeli Prime Minister Benjamin Netanyahu was vaccinated against the coronavirus on live television Saturday, becoming the first Israeli and one of the world’s leaders to be inoculated.

Israel is set to begin vaccinating its health workers and nursing home residents beginning Sunday. Netanyahu said he wanted to be the country’s first recipient to set a personal example and to encourage Israelis to get the shot. U.S. Vice President Mike Pence was vaccinated Friday in a similar attempt to boost public confidence in COVID-19 vaccines.

"I believe in this vaccine," he said before receiving the injection of the Pfizer/BioNTech vaccine at the Sheba Medical Center near Tel Aviv. Netanyahu rolled up the right sleeve of his black, short-sleeve shirt and waited for several minutes before receiving the injection. He called it an "exciting moment" that would put Israel on the path to returning to its normal routines.

The event also gave Netanyahu, who has come under heavy public criticism for his management of the coronavirus crisis, a political boost as the country appears to be heading to its fourth election in just two years.

Netanyahu’s coalition government with his rival, Blue and White party leader Benny Gantz, has been plagued by paralysis and dysfunction since taking office in May and will automatically collapse on Tuesday, if it cannot pass a budget. That would trigger a new election three months from now.

Pharmacists in the U.S. are finding extra doses of Pfizer-BioNtechs COVID-19 vaccine in the distributed vials, potentially expanding the country’s short supply.

After receiving his shot, Netanyahu was placed in observation for half an hour to monitor for possible allergic reactions. He told reporters afterwards that he was determined to lead the country out of the coronavirus crisis.

Israel’s health minister, Yuli Edelstein, also was vaccinated Saturday. Other Israeli leaders, including the figurehead president and military chief, were expected to follow suit on Sunday along with frontline healthcare workers. The vaccination campaign is set to expand to the broader public in the coming weeks.

Netanyahu has said the government has secured sufficient doses for Israel’s 9 million people from both Pfizer and Moderna, whose vaccine U.S. authorities approved this week for emergency use.

But polls have shown that many Israelis are reluctant to receive shots right away.

Israel has had mixed results in its fight against the virus. Netanyahu was lauded in the spring for sealing borders and locking down the country swiftly, a move that battered the economy but drove down infection rates.

But a hasty and erratic reopening sent confirmed cases soaring in late summer, leading to what at the time was one of the world’s worst outbreaks. A second nationwide lockdown has only been partially lifted since then amid a new surge in daily reported cases. Unemployment remains in the double digits.

Israel has reported more than 366,000 confirmed cases and more than 3,000 virus-related deaths since the start of the pandemic. The country currently is recording nearly 3,000 new cases a day, and officials have begun debating the possibility of a third nationwide lockdown to bring the outbreak under control.

As Netanyahu spoke about his vaccine experience, hundreds of protesters stood outside the prime minister’s official residence in Jerusalem calling for his resignation. Protesters, who have been gathering there weekly for over six months, say Netanyahu should not be prime minister when he is on trial on corruption charges. They also accuse him of bungling the coronavirus crisis.

Struggling to beat back the virus and watching his popularity plummet, Netanyahu has for months seen vaccinations as the key to bringing an end to the havoc wrought by the virus.

Israel has an agreement with Pfizer to secure 8 million doses of the U.S. pharmaceutical company’s vaccine — enough to cover nearly half of Israel’s population since each person requires two doses. Netanyahu had personally reached out multiple times to Pfizer Chief Executive Albert Bourla, boasting that at one point he was able to reach the CEO at 2 a.m.

He thanked Bourla on Saturday and called the Pfizer chief "my new personal friend."

Israel has mobile vaccination units with refrigerators that can keep the Pfizer shots at the required minus 70 degrees Celsius (minus 94 F). Israel reached a separate agreement with Moderna earlier this month to purchase 6 million doses of its vaccine — enough for another 3 million Israelis. Officials expect to be able to administer over 60,000 doses a day.

The vaccination rollout comes at an opportune time for Netanyahu, whose Likud Party has been weakened in public opinion polls in recent months and faces a challenge from a new faction led by a former Likud lawmaker. If the country is plunged into a new election campaign, a widespread vaccination drive might reverse the long-serving leader’s political fortunes.

"This was a small injection for one man, but a great step for all of our health," he quipped.