JERUSALEM (AP) - Benjamin Netanyahu says he and his family will move out of Israel's official prime minister's residence by July 10, nearly a month after he was ousted from office following a record 12-year reign.

That's not nearly soon enough for critics who have long accused the Netanyahus of treating the office and its trappings as their own private property, and who see it as another way of undermining the legitimacy of the new government sworn in a week ago.

In a joint statement released late Saturday, Netanyahu and Prime Minister Naftali Bennett said they had agreed the Netanyahus would move out by July 10 and that no more public events would be held at the residence until then. Bennett will begin using the residence the next day.

Netanyahu, who is now opposition leader, has a private home in the seaside city of Caesarea. Bennett will reportedly continue to reside at his home in a Tel Aviv suburb, using the official residence during trips to Jerusalem and for hosting foreign dignitaries.

The relatively modest official residence on Balfour Street in central Jerusalem has been the epicenter of weekly protests against Netanyahu over the past year, reflecting the bitter polarization over his rule and his ongoing trial on serious corruption charges. 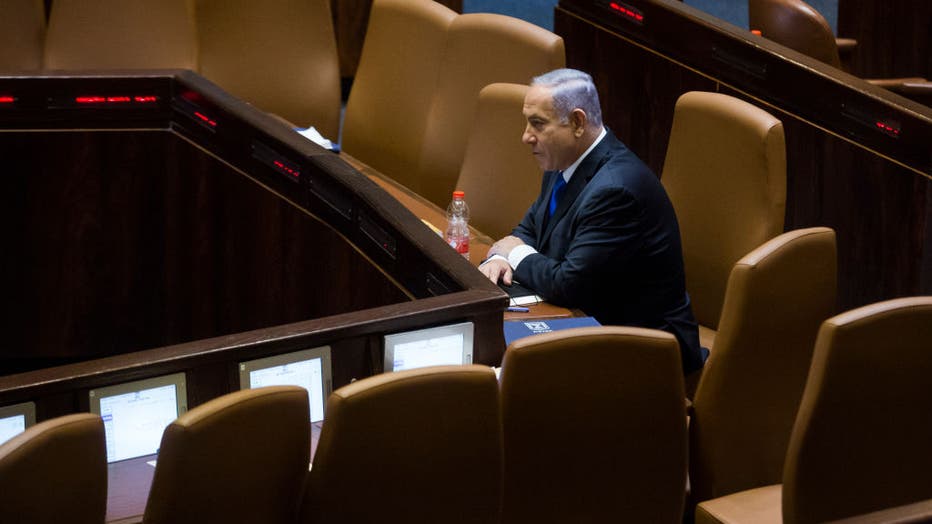 JERUSALEM, ISRAEL - JUNE 13: Israeli Prime Minister Benjamin Netanyahu sits in the Knesset before parliament votes to approve the new government on June 13, 2021 in Jerusalem, Israel. The new government, a broad coalition of parties with a razor-thin

On Saturday night, the protesters showed up with a moving truck with "Crime Minister" written on the side of it.

"They are ordering food, people are coming in to visit them, nobody knows when they are going to leave," said Ishay Hadas, one of the organizers. "We decided to come with our truck, and we are ready to help him anytime."

Some have compared Netanyahu to former President Donald Trump, who contested his election defeat with false claims of voter fraud and whose supporters stormed the U.S. Capitol. Trump skipped President Joe Biden's inauguration but vacated the White House on schedule. Unlike in the U.S., Israel has no established protocol for the handover of the residence.

The political transition has already been more bitter than any in recent memory. After four elections in two years that largely turned on Netanyahu's character and legal woes, a coalition of eight parties managed to form a narrow majority to unseat him.

But he has not gone quietly.

Bennett's speech as incoming prime minister was repeatedly interrupted by loud heckling from Netanyahu's allies. In his own speech afterwards, Netanyahu lashed out at Bennett, calling him weak and inexperienced, and accusing him of defrauding his nationalist supporters by allying with left-wing parties. Netanyahu vowed to return to power, saying "we'll be back soon."

On the following day, Netanyahu reportedly devoted less than a half-hour to a transitional meeting with Bennett in which a former prime minister would normally discuss the country's extensive security challenges and other major issues with his or her successor.

Then Netanyahu hosted former U.S. ambassador to the U.N. Nikki Haley, a Republican widely seen as eyeing a presidential run, at the official residence. In a tweet about the visit, she referred to him as prime minister.

"Netanyahu’s current status in the official residence is that of a temporary guest, staying there at the mercy of Bennett," Amir Tibon wrote in Israel's left-leaning Haaretz newspaper. "His decision to use Balfour for a political photo op with Haley is an unprecedented act of chutzpah, even by Netanyahu’s own standards."

Netanyahu has long been accused of leading a lavish lifestyle and using the trappings of office for his own personal gain. He is on trial for fraud, breach of trust and accepting bribes.

His family's long residence at the house on Balfour Street has also been the focus of lawsuits, with several employees having accused his wife, Sara, of abusive behavior. A housekeeper was awarded $42,000 in damages in 2016, and another filed a lawsuit last year.

Sara Netanyahu was convicted of misusing state funds after she reached a plea bargain settling allegations that she overspent some $100,000 of state money on lavish meals. She’d previously been indicted for graft, fraud and breach of trust.

The family denies any wrongdoing and have said they are the target of a smear campaign by hostile media. Netanyahu has said he is the victim of a "witch hunt" by his political opponents and has compared his corruption trial to a "coup attempt."

The protests outside the residence appear likely to continue until they move out, which will be seen by his many of his opponents as the final confirmation that his time in power is truly over — at least for now.

"People will believe that he is going to come back because this is what he told them."