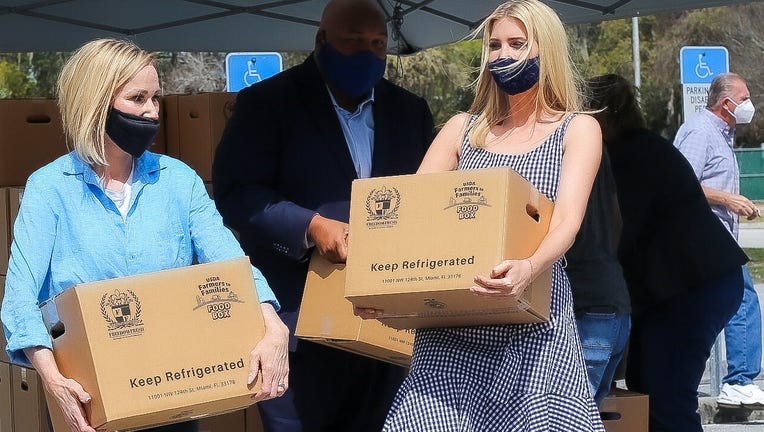 APOPKA, Fla. - Former senior adviser to the president Ivanka Trump on Tuesday made her first public appearance since leaving the White House.

Trump helped deliver food boxes in Apopka, Florida, at another event for the previous administration's "Farmers to Families" food box program, which was implemented last April as part of the Coronavirus Food Assistance Program to help both farmers and Americans in need during the COVID-19 pandemic.

During her visit, Trump delivered boxes to the homes of disadvantaged community members who were unable to attend the in-person distribution event.

She also delivered boxes to a local shelter for human trafficking survivors, according to the source.

The shelter called The Lifeboat Project thanked Trump in a statement posted to the shelter's Instagram account, asking readers to put politics aside and focus on the issue at hand.

"Human Trafficking is a crime against humanity, and that alone stands above politics," the Lifeboat Project wrote. "Today was a beautiful day to put politics aside at The Lifeboat Project and let faith and truth be our topic of connection. We had the opportunity to fill the room with global leaders and have a conversation about our growing world model."

The organization thanked "all levels of government, community leaders," and its "partnered agencies."

"It was the beginning of acknowledging truth and showing that faith always overcomes fear," the statement said.

The program required the United States Department of Agriculture to purchase fresh produce, dairy and meat products from American farmers, which is then redistributed to food banks, community organizations, faith-based organizations and other nonprofits serving Americans in need.

The USDA has delivered more than 144 million boxes of fresh produce, milk, dairy and cooked meats to families since the program started. The department announced a fifth round of food purchases worth $1.5 billion on Jan. 4 that will be delivered through the end of April.

A list of USDA-approved contractors for the fifth round of the food box program can be seen on the department's website.

LINK: For updates on this story, visit FOX News.