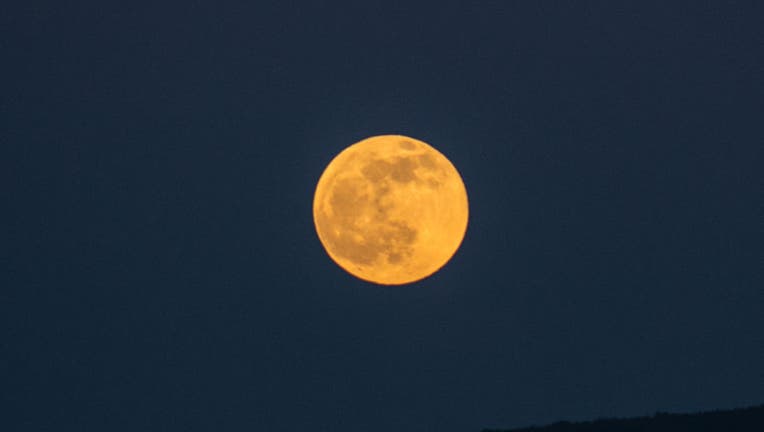 First full moon of 2020, wolf moon, shows up upon the harbor of Nea Artaki on the island Euboea, in Artaki on January 10, 2020. (Photo by Wassilios Aswestopoulos/NurPhoto via Getty Images)

The Wolf Moon, the full moon in January, is set to appear Monday night at 6:48 p.m. ET, according to NASA.

Time and Date reported Friday that moonrise in New York City is at 4:31 p.m. EST.

For west-central Africa and central European time zones and eastward across the Africa, Eurasia and Australia, the wolf moon will be on Tuesday.

It will appear full for around three days, from Sunday night through Wednesday morning.

For some parts of the world, the January's first full moon will be accompanied by a penumbral lunar eclipse.

"Stay warm, but when the sky is clear, take advantage of these early nightfalls and late sunrises to get out, look up, and share the wonders of the sky!" NASA's Gordon Johnston said in a statement.

According to Space.com, the full moon appears when the moon is exactly on the opposite side of the Earth from the sun.

"The moon looks illuminated because we see the sun's light reflected from it, and because the moon's rotation period is the same as its orbital period, we always see the same face of our satellite world," the website said.

According to the Maine Farmers' Almanac, this full moon is called the wolf moon based on stories about packs of wolves heard howling outside villages. Other names include the ice moon, the old moon and the moon after Yule: the three-day winter solstice festival in pre-Christian Europe.