Arrests made in shooting of Tampa girl

TAMPA, Fla. - Five men were arrested by US Marshals for the shooting that killed 4-year-old Suni Bell, providing the first step in bringing justice for a family who lost their ‘princess’ on August 22, 2021.

The Tampa Police Department and Hillsborough State Attorney's Office announced the arrest of Zvante Sampson, 30, Quandarious Hammond, 28, James Denson, 24, Jaylin Bedward, 22, and Andrew Thompson, 22 – all facing charges of attempted first-degree murder of another victim, conspiracy to commit murder, and shooting into a vehicle. 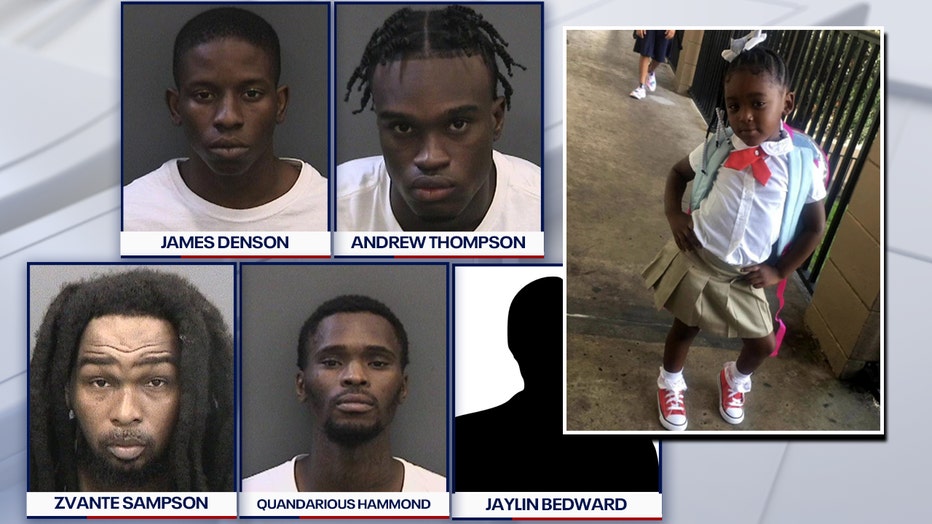 Hammond and Sampson each also face a charge of attempted murder on a third victim. Hammond, Thompson, and Denson each face an additional charge of discharging a firearm from a vehicle in public.

PREVIOUS: 'Celebration for a princess': Family, friends say goodbye to 4-year-old gunned down in Tampa

The shooting happened the night of August 22. Suni was riding in the back seat of a car driving down Hillsborough Avenue when shots were fired. At the time, police said they believed the shooting was targeted.

Community members are calling for an end to gun violence one week after a 4-year-old was shot and killed in Tampa. Dozens of people took to the streets to call for justice as police search for suspect.

In the days and weeks after Suni's death, her family made public pleas for anyone with information to come forward. Nearly $10,000 in reward money was also offered for tips leading to arrests in the case.

Tampa police say they are still investigating the case and believe there may be others who were involved. Anyone with information is asked to contact CrimeStoppers of Tampa Bay at 1-800-873-TIPS. Tips may remain anonymous and could be eligible for a cash reward.

Family and friends celebrated the life of 4-year-old Suni Bell two weeks after she was gunned down while riding in a car with her mother.