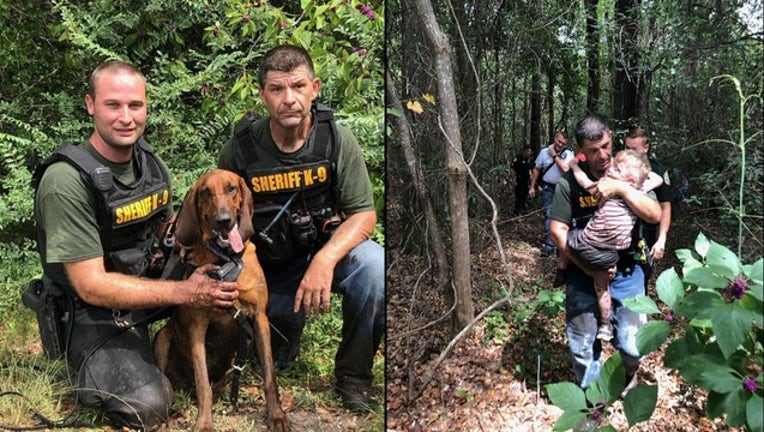 SANTA ROSA COUNTY, Fla. - A 3-year-old boy with autism is safe and back with his family thanks to some Florida deputies and their bloodhound.

According to the Miami Herald, Aedric's grandmother was watching the young boy on Sunday when he unlocked the deadbolt on the door and walked out of the house while she was in the bathroom.

Deputies say he wandered into the woods behind a neighbor's home in Pace, a Pensacola suburb in the Florida Panhandle, and got lost.

“The most terrifying words a mother can get on the phone is ‘your child is missing, get home right now,’” Audra Hughes said at a news conference Monday morning.

“Once the dog hit the ground, it was 28 minutes until we got the child,” Sheriff Bob Johnson said.

Deputies say Aedric was found surrounded by briars and mud about 200 yards away. Deputies reportedly had to use a machete to reach him.

The boy suffered some scratches and bug bites but was otherwise ok.

"Great job Santa Rosa County Sheriff’s Office!" he wrote on Facebook. "Their bloodhounds found a missing 3 year old autistic boy who was lost in the woods today. Thank you to everyone else that cane out to help with this effort."