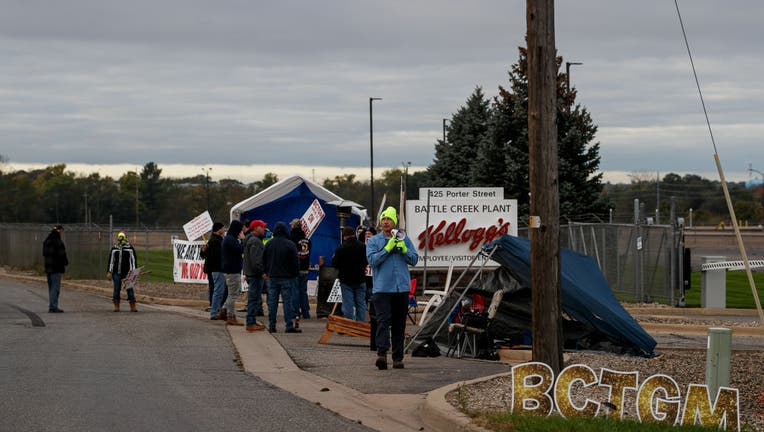 Demonstrators during a union workers strike outside the Kellogg plant in Battle Creek, Michigan, U.S., on Friday, Oct. 22, 2021. Members of the Building and Construction Trades Council union will return to work Tuesday at the Kellogg Co. cereal facto

NEW YORK - A strike at Kellogg that has gone on since early October has ended after workers voted to ratify a new labor contract at the company’s four U.S. cereal plants.

The contract covers approximately 1,400 workers represented by the union at plants in Michigan, Nebraska, Pennsylvania and Tennessee.

Kellogg said Tuesday that the new contract provides immediate, across the board wage increases and enhanced benefits for all. It also provides an accelerated, defined path to top-tier wages, a major sticking point for workers, and benefits for transitional employees.

"We are pleased that we have reached an agreement that brings our cereal employees back to work," CEO Steve Cahillane said in a prepared statement.

Workers that have been on strike since Oct. 5 will return to work on Monday, Kellogg said, after the holiday.

An Illinois woman is suing Kellogg's for an alleged lack of strawberries in its Pop-Tarts.

The Bakery, Confectionery, Tobacco Workers and Grain Millers International Union said the contract is a win for workers.

"This agreement makes gains and does not include any concessions," union President Anthony Shelton said in a prepared statement.

Members of the Bakery, Confectionary, Tobacco Workers and Grain Millers International Union voted on the new offer over the weekend. The offer includes cost-of-living adjustments and a $1.10 per hour raise for all employees.

Earlier this month, an overwhelming majority of workers voted down a five-year offer that would have provided 3% raises and cost of living adjustments in coming years to most, but not all of the workers.

Workers have been on strike at plants in Battle Creek, Michigan; Omaha, Nebraska; Lancaster, Pennsylvania; and Memphis, Tennessee. They make all of the company’s well-known brands of cereal, including Apple Jacks and Frosted Flakes.

Kellogg’s said most workers at its cereal plants earned an average of $120,000 last year, though union members have said they work more than 80 hours a week to earn that, and those wages are only available to longtime workers. Under the two-tiered pay system the company uses, newer workers are paid less and receive fewer benefits.

That pay system has been a sticking point during the negotiations, and Kellogg’s offer didn’t change on that part of the contract. The company has said it will allow all workers with at least four years of experience move up to the higher legacy pay level as part of this contract. Union officials previously said that plan wouldn’t let other workers move up quickly enough. The company has also proposed eliminating the current 30% cap on the number of workers at each plant who receive the lower wages.

The workers remained unified during the strike amid worker shortages across the country, which may have given them more leverage in negotiations. And the said raises were overdue after workers kept the plants running throughout the coronavirus pandemic.

Throughout the strike Kellogg has been trying to keep its plants operating with salaried employees and outside workers, and the company said late last month that it planned to start hiring permanent replacements for the striking workers.

Shares of Kellogg Co., based in Battle Creek, Michigan, fell more than 2% Tuesday.