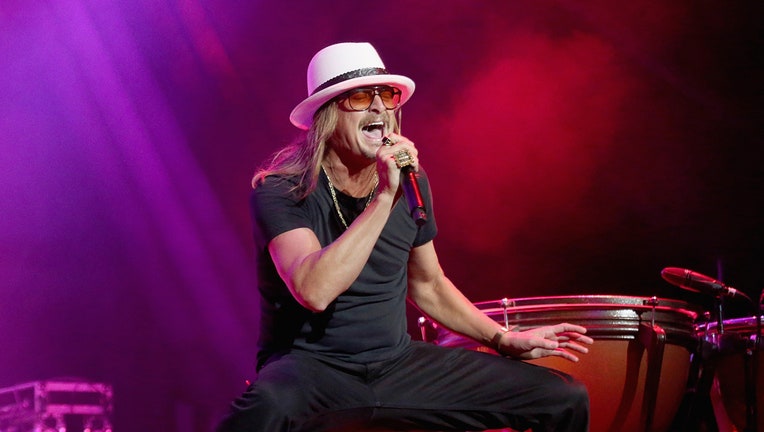 Kid Rock performs in concert during day two of KAABOO Texas at AT&T Stadium on May 11, 2019 in Arlington, Texas. (Photo by Gary Miller/Getty Images)

Kid Rock has threatened to cancel shows on his upcoming "Bad Reputation Tour" if there are COVID-19 policies put into place for concertgoers.

The musician made the announcement Thursday in a video on his social media accounts ahead of tickets going on sale for his tour Friday.

"You'll be getting your money back because I won't be showing up, either," Rock said in the video. "If you think I'm going to sit out there and say don't tell me how to live, 'We The People,' while people are holding up their f---ing vaccine cards and wearing masks, that s-- ain't happening."

The 51-year-old told fans there were several cities he didn’t schedule for his tour for this reason.

"It’s actually kind of unfortunate," he continued. "We actually scratched Buffalo, New York off the list because of that, and Toronto, Canada, and several other cities we were looking at, cause, ya know, I’m not one way or the other, but I don't want to deal with that s--- either and I know that you don't."

Rock announced dates for his "Bad Reputation" tour earlier this week. The 26-show tour is slated to kick off in Evansville, Indiana, on April 6 and will conclude on Sept. 17 near Rock’s hometown of Detroit in Clarkston, Michigan on Sept. 17.

World health officials are offering hope that the ebbing of the omicron wave could give way to a new, more manageable phase of the COVID-19 pandemic, even as they warn of difficult weeks ahead and the possibility of another, more dangerous variant arising.

In the U.S., deaths — now at 2,000 each day — are still surging, but new hospital admissions have started to fall, and a drop in deaths is expected to follow.

Vaccine mandates in the workplace: What you need to know | LiveNOW from FOX

The Supreme Court has stopped a major push by the Biden administration to boost the nation's COVID-19 vaccination rate, a requirement that employees at large businesses get a vaccine or test regularly and wear a mask on the job. Employment attorney Joshua Black speaks with LiveNOW's Daytona Everett about what this means for the average employee.

Rock also discussed the success of his three new singles released this week, including "We the People," which became the number-one rap song on the iTunes chart.

"I’m glad you’re digging them," Rock continued. "The response to ‘We the People’ is beyond crazy."

Last August, Kid Rock canceled a concert after "over half" of his band tested positive for coronavirus.

He confirmed the news in a string of tweets after a post by Billy Bob's Texas said the Aug. 27 and 28 shows were canceled.

Rock's tweet read, "Billy Bob's Shows This Weekend... I am p---ed. Over half the band has f--king covid (not me), and before you s--t for brains bloggers and media trolls run your mouths, many of them, like me, have been vaccinated."