LAKELAND, Fla. - The car line at South McKeel Elementary in Lakeland – like all school car lines – is a crazy time for parents.

"Just getting up in the morning and getting your kids ready – which is a struggle some mornings – and having to come out here and deal with all the traffic. You got to get through the car line to get to work and sometimes it goes a little slower than you want. It's a stressful time," said Shawn Slade, a parent.

On the last Friday before Halloween, the car horns are abundant.

It's not road rage, drivers alerting other drivers or frustrated parents in a traffic jam, it's the sound of support for these three dads who dressed up in full costumes, welcoming kids to school. 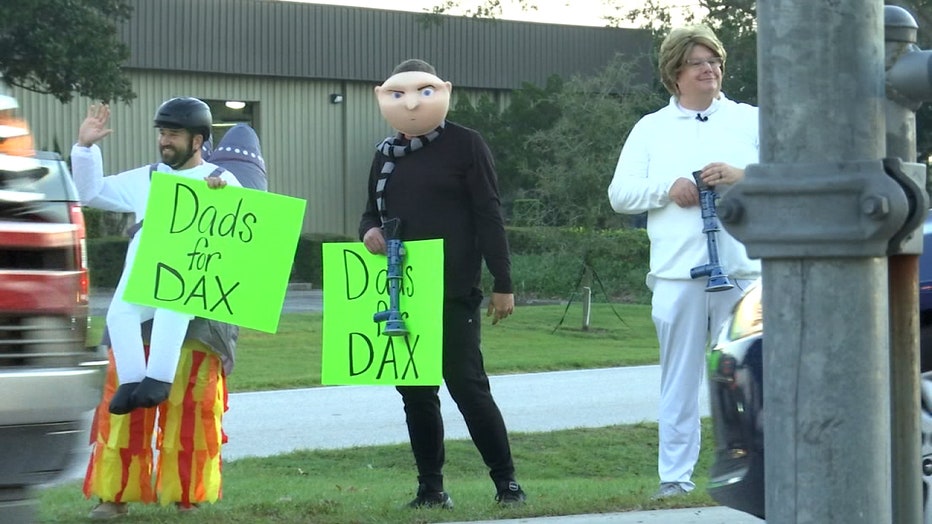 "This whole car line thing, it really is sort of like a NASA flight plan," described Tony Johnson. "Getting in our around and down and not going the wrong way on a one-way street."

To the casual observer, it's just some dads volunteering at their kids' school. Behind the mask, these are men on a mission. They call themselves "Dads for Dax."

"It's sad that Dax can't be out here right now, but he's here in spirit, and we're carrying on his spirit for him," Slade explained. "Everybody loves Dax, and we just wanted to band together to support him and carry on his tradition of doing car line that he loved to do."

Dax Gingras – or Mr. Dax as the kids call him – is a former elementary school P.E. teacher.

For years, he'd stand along the car line route in a different costume every day in the month of October. 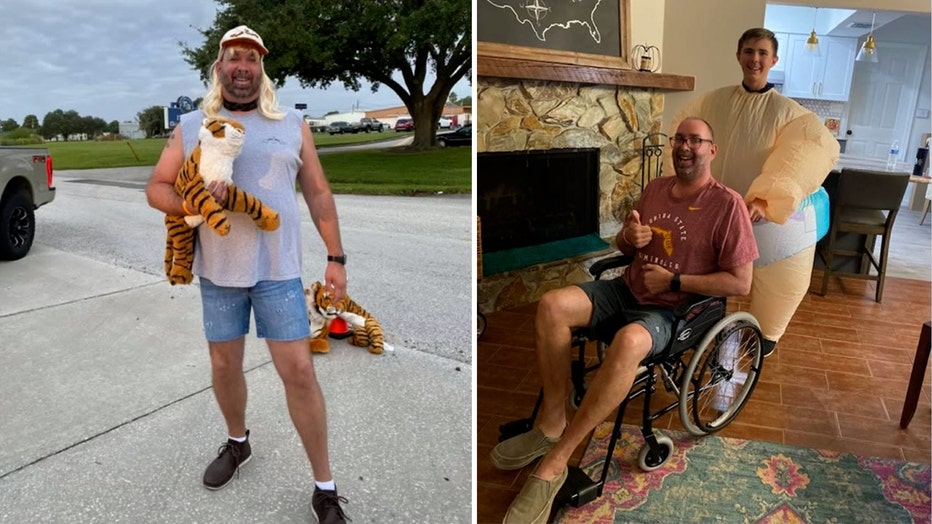 "We'd talk in the car about what we thought Dax was going to wear that day and it was always the kick-off to their morning to see Dax in a different outfit," Slade recalled. "It's stressful getting ready in the morning, and then you saw Dax, and he had on some silly costume and some silly joke to tell you and a smile on his face. It really just set the mood in the morning."

Dax has been battling glioblastoma off and on for ten years. It's a cancer of the brain and spinal cord. It's inoperable, incurable.

Because of its impacts, Dax isn't able to do what he loves -- volunteer at the car line.

So "Dad's for Dax" stepped up this past month to carry on. There may be different faces behind different costumes, but they are all there for one man: Dax Gingras.

"I appreciate the opportunity to come out here and have a small taste of what Dax had every day," Slade said.

"You know when he wasn't able to do it this year, he's such a staple of the community and being involved every single year in really elaborate costume every day," Johnson added. "Deeping people safe and entertaining at the same time. To get a chance to stand in when he couldn't meant a lot to me as a part of the Lakeland community."

Dax Gingras spoke to FOX 13 on the phone, saying he is in good spirits. He says the response from "Dads for Dax" and the community has been very humbling.

If you have an idea for the next Extraordinary Ordinaries, contact FOX 13's Walter Allen by email: walter.allen@fox.com.