CLEARWATER, Fla. - It was a somber scene on the Courtney Campbell Causeway Friday night as loved ones gathered to remember 29-year-old Eddie Jimenez.

He was riding his motorcycle on the causeway last weekend and was hit and killed by a driver who Clearwater Police say was high on drugs at the time. Those at the vigil hope Eddie's story reminds everyone on the road that one careless decision can impact countless lives.

"He was a really bright soul," said Sarah Goake.

"He was one of the kindest people I've ever known in my entire life," said Jacob Slowgrove, "and I can't tell you how much I'm going to miss him."

Jimenez was described as a kind, helpful person who loved making people laugh, enjoyed drawing, and riding his motorcycle.

"He just left my house," said his fiancée Samantha Delfosse. "He said 'I love you.' We gave each other a kiss, I told him to let me know when he gets where he's going, just like always. But I never got that text or phone call." 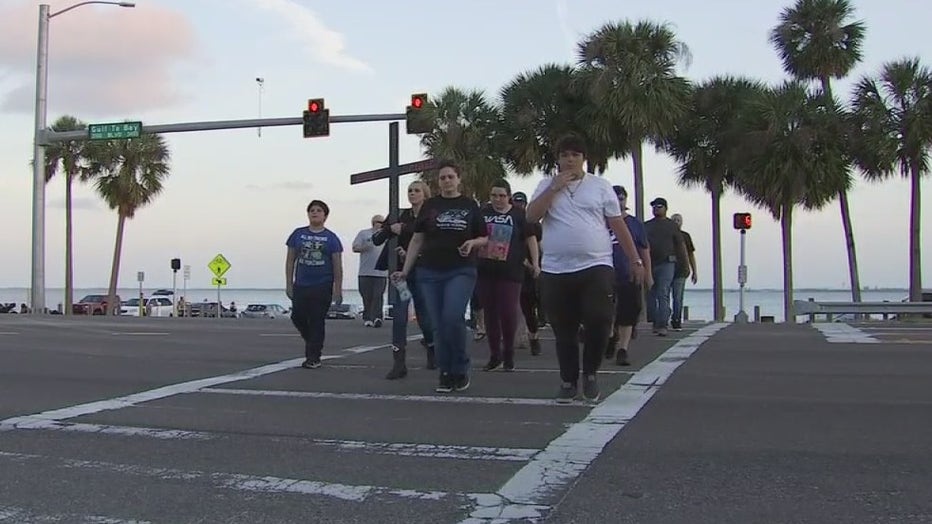 Police say French made a left turn in front of the bike, driving around cones in place to prevent left turns at that point. Jimenez hit the truck and died there at the scene.

French told police that he'd smoked crack cocaine earlier. They also learned he'd had surgery that day, was given multiple narcotics and left the facility against medical advice. He was charged with DUI manslaughter and vehicular homicide.

"I just want you to know that you took of the best people away from me," Slowgrove said. "That's for sure. One of the closest people I've had my entire life."

Those in the motorcycle community know that Florida's roads can be treacherous on two wheels. Last year alone, there were more than 8,000 motorcycle crashes with 516 deaths.

"I mean, people need to pay attention and honestly, value other people's lives as well as their own," said Jimenez's former roommate, Angela Krafft.

"He was a very safe rider," Delfosse said. "He was doing nothing wrong."

On a road that Jimenez had traveled many, many times, there's one more memorial cross standing, a tragic reminder of what's at stake when anyone gets behind the wheel.

French has since bonded out of the Pinellas County Jail. Eddie's fiancée says she now wants to change state law and increase penalties for crimes like DUI manslaughter.