A 10-week-old golden retriever was born with a tail on his forehead, garnering adoration on social media and a fitting nickname.

CAPE GIRARDEAU, Mo. - A 10-week-old golden retriever was born with a tail on his forehead, garnering adoration on social media and a fitting nickname: “puppercorn.”

Over the weekend, the puppy was found after being abandoned, said Rochelle Steffen, from Mac’s Mission in Cape Girardeau, Missouri, who is fostering the “puppercorn” named Narwhal.

“The million-dollar question about Narwhal’s extra tail on his face: Is it connected and does it wag? The extra tail is not connected to anything and has no real use other than making him the COOLEST PUPPY EVER!” said Mac’s Mission in a Facebook post on the puppy.

Steffen said she “fell in love” with Narwhal when she saw him and that he was “absolutely the cutest thing you’ve ever seen.”

“Still in awe of this — a real-life ‘puppercorn’! ‘Narwhal’ from Mac’s Mission had a great exam with us this week. His extra little tail has even gotten some national publicity, which is great news for Mac the pitbull and their rescue mission,“ the clinic said in their own Facebook post. ”Narwhal, you’re a sweetie!”

The clinic’s veterinarian Brian Heuring said the puppy was most likely born with the additional forehead tail and that it was a “congenial anomaly or defect that at this time, doesn’t appear to cause any complications.”

Steffen said for now, she plans to keep Narwhal’s additional tail, adding that it makes him “super adorably special.” 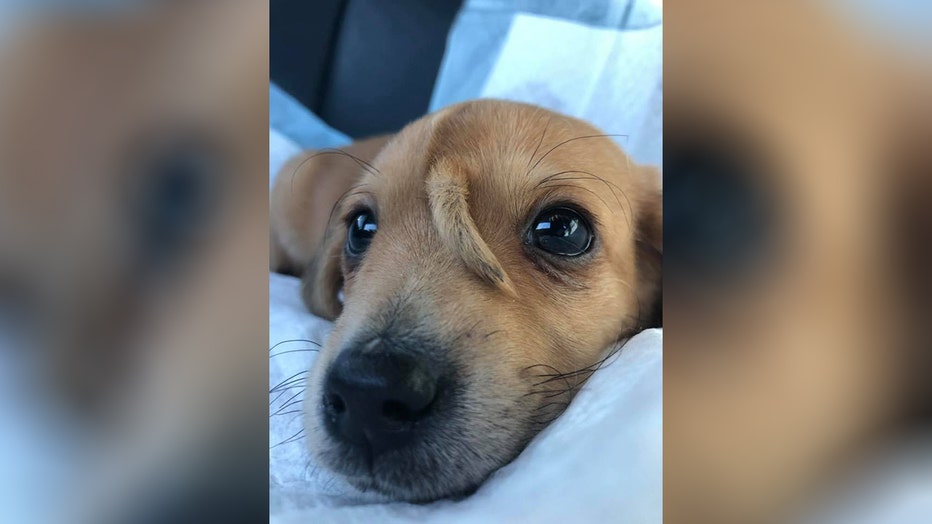 A 10-week-old golden retriever named Narwhal was born with a tail on his forehead, garnering adoration on social media and a fitting nickname: “puppercorn.” (Photo: Mac's Mission)

“It’s me Narwhal!” Mac’s Mission said in another Facebook post with a picture of the puppy. “I am super excited for being the poster child for ‘special is awesome.’”

Mac’s Mission is “we specialize in special,” and Steffen said in her seven years with the rescue, she has never seen anything like the tail on Narwhal’s forehead.