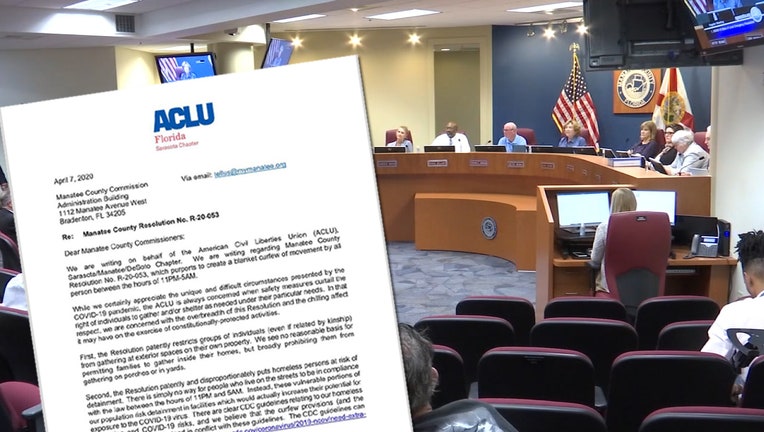 BRADENTON, Fla. - After a local ACLU chapter expressed concern over Manatee County's curfew order, changes were made by the commissioners.

Private property enforcement is no longer included in Manatee County’s curfew order after a virtual emergency meeting on April 10. When county commissioners voted to extend the curfew to April 17, they also updated the language in the original curfew plan to no longer allow police to stop gatherings on private property. The updated resolution also provided additional allowances for the homeless population, according to county spokesman Nick Azzara.

The decision came three days after the Sarasota chapter of the Florida ACLU called on county leaders to rescind the curfew, accusing county leaders of disproportionately putting homeless people at risk of detainment and of banning families from gathering in their own front yards.

In a letter to Manatee County Commissioners dated April 7, the Sarasota chapter of the Florida ACLU called on county leaders to rescind the curfew, accusing county leaders of disproportionately putting homeless people at risk of detainment and of banning families from gathering in their own front yards.

Manatee County enacted a curfew on April 3 in an effort to halt the spread of COVID-19. At the time, law enforcement officials said despite the orders and weeks of warnings about social distancing, there were ongoing issues with large group gatherings, especially at night.

The majority of the complaints had been coming from gatherings at private event halls and vacation rentals. Leaders said a curfew would send a clear message to county residents that social distancing must be taken seriously.

On April 3, Manatee County Sheriff Rick Wells said the curfew would not be an excuse for deputies to pull people over, but gatherings like block parties were now out of the question.

In the ACLU letter to county commissioners, the ACLU board said the curfew restricts too many rights and unfairly affects the most vulnerable members of the community. The letter goes on to say that the ACLU is always concerned "when safety measures curtail the rights of individuals to gather and or shelter as needed under their particular needs. In that respect-- we are concerned with the over-breadth of this resolution and the chilling affect it may have on the exercise of constitutionally-protected activities."

Three days after the letter was sent, several angry citizens took to the podium to complain during a virtual emergency meeting in Bradenton. 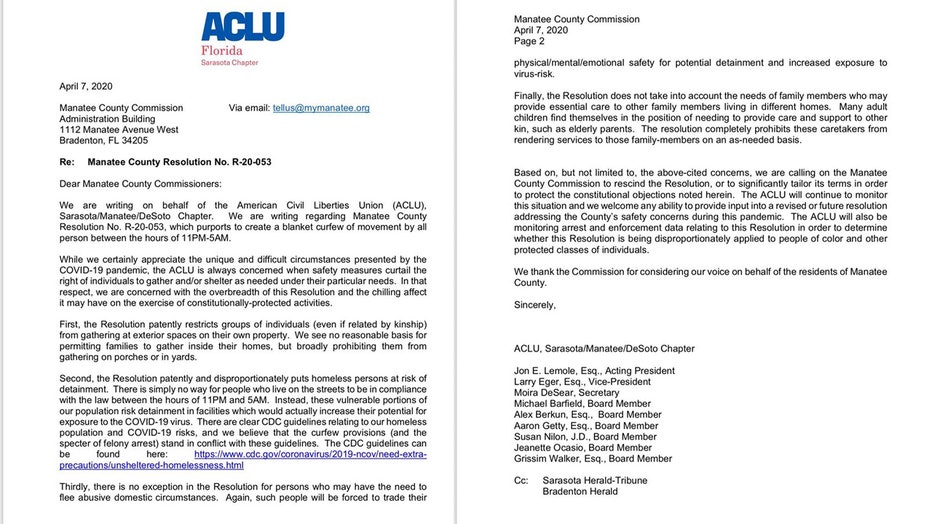 “You should all be fired and removed,” Manatee County resident Andrea Griffin told commissioners, “but we can’t do that until election time. And believe me, we will remember. My government has no right to make decisions for me and my family.”

A Manatee County spokesperson told FOX that all ACLU concerns were addressed with the updated language. FOX 13 reached out to ACLU for a statement.

Editor's Note: An earlier version of this story excluded information about Manatee County changing its curfew order to no longer allow law enforcement to stop gatherings on private property. The commissioners updated their curfew language on April 10.