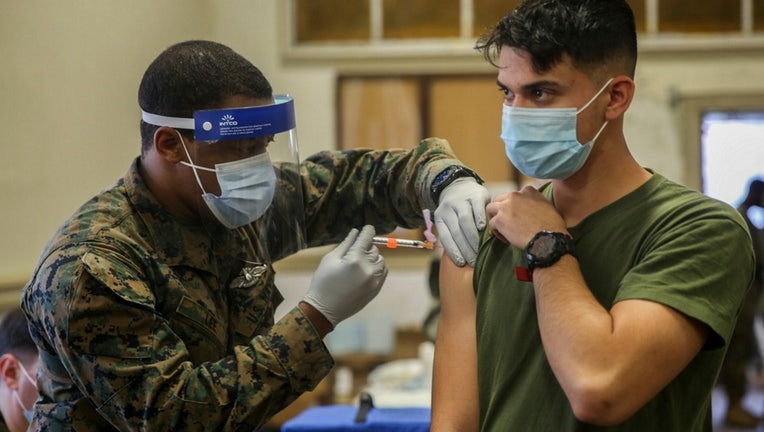 WASHINGTON - The military on Thursday discharged 103 Marines who refused to get a COVID-19 vaccine in defiance of a Pentagon mandate.

Secretary of Defense Lloyd Austin on Aug. 25 directed all military branches to ensure service members receive the vaccine as numbers surged over the summer. The deadlines for each branch of the military passed as of Dec. 15, and disciplinary action appeared to immediately follow.

The Marine Corps reported Thursday that 95% of its active-duty force of 182,500 Marines have received at least one dose of a COVID-19 vaccine – the lowest percentage among each branch of the armed forces, according to ABC News.

The Army announced that as of its Dec. 15 deadline 96% of active-duty soldiers have received a full vaccination regimen against COVID-19, with that figure to rise to 98% after remaining soldiers receive their second shot. Less than 1% of the roughly half-million soldiers have outright refused the order.

Congress this week passed a defense authorization bill that included a provision ensuring that personnel who refuse the jab will receive an either an honorable discharge or "general discharge under honorable conditions."

Around 30,000 active-duty members from among all branches of service have so far refused the shot.

The news follows a tense standoff between some state governors and the Pentagon, with five governors writing to Austin to ask that he rescind the vaccine mandate, which the governors would need to enforce against their National Guard forces.

But Texas Gov. Greg Abbott has outright refused to enforce the mandate, informing Secretary Austin in a letter Thursday that "If unvaccinated guardsmen suffer any adverse consequences within the State of Texas, they will have only President Biden and his Administration to blame."

Secretary Austin had recently threatened to cut off federal funding for unvaccinated guardsmen should states not comply, but Abbott remains undaunted in his stance.