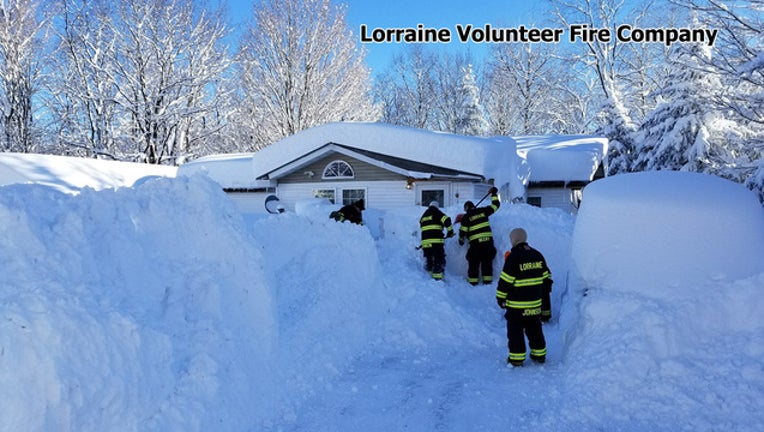 Firefighters responded to a home in Lorraine, N.Y., because its resident couldn't get out due to the massive amount of snow. (Via Lorraine Volunteer Fire Company)

NEW YORK (FOX5NY.COM) - A woman in northern New York got stuck inside her house because of how much snow fell in the area, according to authorities. More than 6 feet of snow covered parts of Jefferson County.

Firefighters responded to the home because its resident said she couldn't get out, according to a Facebook post by the Lorraine Volunteer Fire Company.

They used a front-end loader to move the mounds of snow out of the way to get to her door. The county sits on the eastern edge of Lake Ontario and is susceptible to heavy lake-effect snowfall.

"Residents in the Town of Lorraine and Worth, please check on your neighbors," the fire company wrote in the post, which included several photos of the snow-bound home. The images show a front-loader clearing away snow at the property and firefighters shoveling a path to the front door.

Temperatures were -5 degrees on Wednesday night and Wind Chill Warnings were posted for the area. The temperatures over the weekend were expected to fall into the negative double-digits with wind chills much lower.

The county is home to Fort Drum, the largest military base in the northeast.