CHICAGO - McDonald’s is teaming up with the White House to encourage Americans to get a COVID-19 vaccine, including a redesign of its coffee cups.

The new McCafe cups and delivery seal stickers will debut in July. The design features the U.S. Department of Health and Human Services’ slogan "We Can Do This," a campaign created to increase COVID-19 vaccine confidence in the effort to end the pandemic.

The coffee cups and stickers will also direct customers to vaccines.gov, which helps people find the nearest location to get a COVID-19 vaccine and answers questions about vaccine safety and efficacy.

McDonald’s also said it will promote the "We Can Do This" campaign on its Times Square billboard later this month. 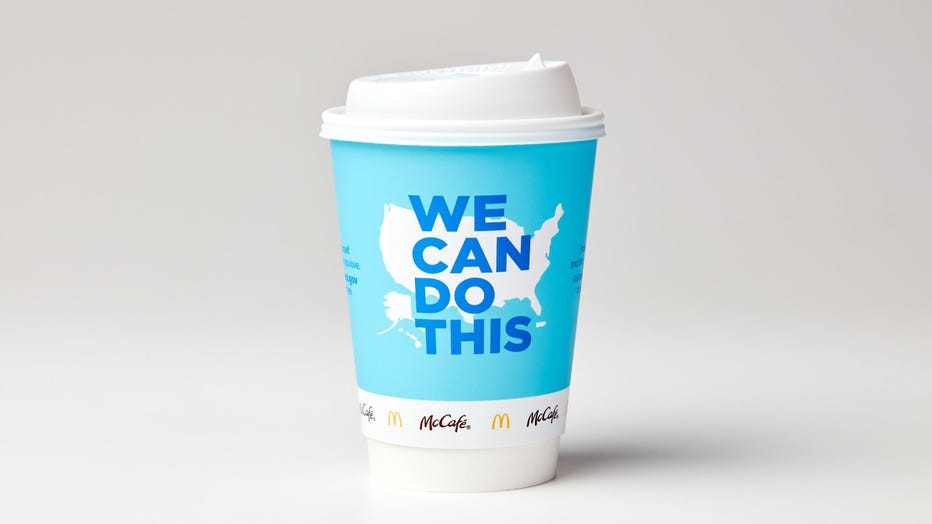 A provided image shows the new McCafe hot coffee cups that will debut in U.S. McDonald’s locations in July of 2021. (Photo credit: McDonald’s)

Getting as many people vaccinated as possible will help restore a recognizable normal for Americans and is crucial in the fight to end the pandemic, experts say. More than 152 million people, or just over 58% of U.S. adults, have received at least one dose, according to the Centers for Disease Control and Prevention. About 44% of adults are fully vaccinated.

Vaccine hesitancy has also gone down as the number grows. A new AP-NORC poll found about 1 in 5 American adults say they probably or definitely won’t get vaccinated, compared to about a third in January, when the shots were just rolling out.

But the Biden administration now faces a pivotal moment in the U.S. vaccination campaign as it works to reach those who are still holding back. Demand has sagged in some parts of the country, resulting in the White House taking steps to make it easier to get the shot.

"Thanks to McDonalds, people will now be able to get trusted information about vaccines when they grab a cup of coffee or order a meal," HHS Secretary Xavier Becerra said in a statement. "Ending this pandemic requires all of us working together to do our part, including encouraging our friends and family to get vaccinated."

Last week, President Joe Biden announced his new goal of getting 70% of Americans to have at least one dose by the Fourth of July. He called on states and federal pharmacy partners to make the vaccine available on a walk-in basis. The government also launched the vaccines.gov website, as well as a text-back program to find a nearby appointment.

Those who are holding out on getting vaccinated are from all over American society, according to the poll. Experts say there is no one-size-fits-all message, and that people need to hear from trusted sources like their own doctors.

Adults under 45, rural Americans and Republicans are especially likely to say they will avoid vaccination, the poll found. But again, attitudes are changing: 32% of Republicans now say they probably or definitely won’t get vaccinated, down from 44% in January.

A combination of huge studies and real-world data show the main side effects of the U.S. vaccines are temporary fevers or aches as the immune system revs up. The shots are undergoing unprecedented safety monitoring, which last month led to a temporary pause in Johnson & Johnson vaccinations to determine how to handle an incredibly rare risk of blood clots.

Even after that pause, overall confidence in the vaccines is up slightly compared with a few months ago, with 45% of all adults now very or extremely confident that the shots were properly tested for safety and effectiveness, compared with 39% in an AP-NORC poll in February.

Similar to the McDonald’s partnership, other companies have launched initiatives to encourage vaccines. Some employers are rewarding workers who get inoculated, while Krispy Kreme is offering a free doughnut to anyone who presents a valid vaccination card for the rest of 2021.

The Atlanta Braves vaccinated fans who attended the May 7 and 8 games against the Philadelphia Phillies. Target is offering a $5 coupon to customers who get vaccinated at its in-store CVS pharmacy locations.