A new school on the Clearwater side of the Courtney Campbell Causeway adds to multiple medical teaching institutions in the Bay Area.

CLEARWATER, Fla. - The Tampa Bay Area is in the middle of a medical school boom. The new Nova Southeastern University Florida, Dr. Kiran Patel College of Osteopathic Medicine is open, just on the Clearwater side of the Courtney Campbell Causeway. And the new University of South Florida medical school will open in downtown Tampa early next year.

"This is where modern medicine needs to be," said Dr. Kenneth Johnson, an obstetrician-gynecologist and executive associate dean of the Tampa Bay campus of NSU Florida. "It is very exciting that we're going to grow together."

It took 24 months to design and build the 27-acre NSU Florida campus to fulfill accreditation requirements, according to architect Wayne Dunkelberger of Baker Barrios. He says the curved, blue glass was used to connect with the nearby water, and copper was used as siding to relate to the philosophy of osteopathic medicine.

"Copper is one of those properties on Earth that heals itself," explained Dunkelberger. 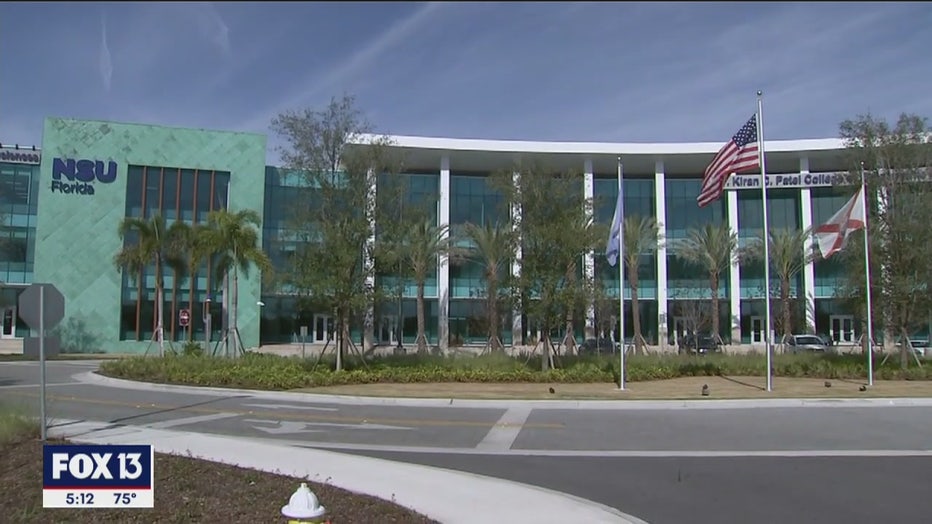 NSU Florida moved around 1,000 students from its campus in Brandon to the new Clearwater campus, including many health-related programs ranging from physical therapy to cardiovascular sonography. School officials say employment opportunities in those fields are plentiful.

"Some people in the class ahead of us, they've already received job offers, and they have another year to go," said Nick Sample, a first-year student in the anesthesia assistant program.

Both NSU Florida and USF say their schools include the newest technology including patient simulators that can simulate childbirth.