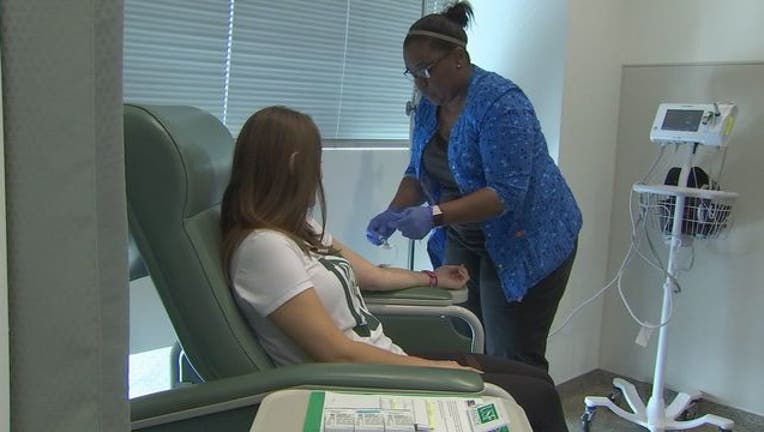 TAMPA (FOX 13) - For the more than one million-and-a-half young men and women who have Crohn's disease, living a normal life is a challenge and 23-year-old Lauren Papay is no exception.

Lauren is a nursing student at the University of South Florida.  At the age of 19, she was diagnosed with Crohn's disease, an inflammatory bowel condition that can affect other parts of the body.

"I was a little scared you know because I knew it was like a really big disease, and then I would have to live with it the rest of my life and it impacts everything," Lauren remembers.

To control her disease, she gets two-hour infusions of a drug called Remicade to keep the inflammation in check and block symptoms like diarrhea, bleeding, and overwhelming fatigue.

"Things are pretty much in control it's like the week leading up to the infusion there’s a lot of fatigue and sometimes I don't want to get out of bed," she says.

The first drug she took stopped working and she's now requiring more frequent doses of the Remicade, dropping back from infusions every eight weeks to every five.

"If it stops working my doctor started talking about a combination therapy using a different medicine alongside but there's a lot of side effects and risks involved with those medications, so I haven't started those yet," she explains.There are still FDA-approved medication options for Lauren, but U.S.F. gastroenterologist Dr. Renee Marchioni-Beery says it's critical to find more.

"Some people can become tolerant to certain medications, they have lost effect, they may have developed side effects that preclude us from using that medication, and so you know we're looking for various other targets to control inflammation. We still have a limited armamentarium of medications and so it is crucial to continue to study these medications which we are, and to find patients that may help us in this journey," Marchioni-Beery explains.

To help find those new targets, USF-Health is enrolling patients into clinical trials, testing two experimental drugs. There are studies open for both Crohn's and ulcerative colitis.

Dealing with the disease is a struggle, but so far the medicine is helping Papay keep up with a busy academic schedule.

She realizes for many others like her, that's not the case.