Message in a bottle found 371 miles away in Melbourne Beach

Every morning as the sunrises, Betty Gonzalez walks or jogs five miles along Melbourne Beach. On Saturday, a bottle in the midst of some seaweed stopped her in her tracks.

"I really enjoy the peacefulness of the ocean," Gonzalez said.  "The colors are so different every morning it’s just a zen moment."

Along the way she snaps pictures of the colors she sees and any interesting creatures she finds.  On Saturday, a bottle in the midst of some seaweed stopped her in her tracks.

"It was just stuck in the seaweed. I just at first I took a picture of it because it thought it was cool and then is saw that there was a note inside of it," Gonzalez said.

She hustled home, pried the cork loose, pulled the note of a plastic bag anxious to read it. 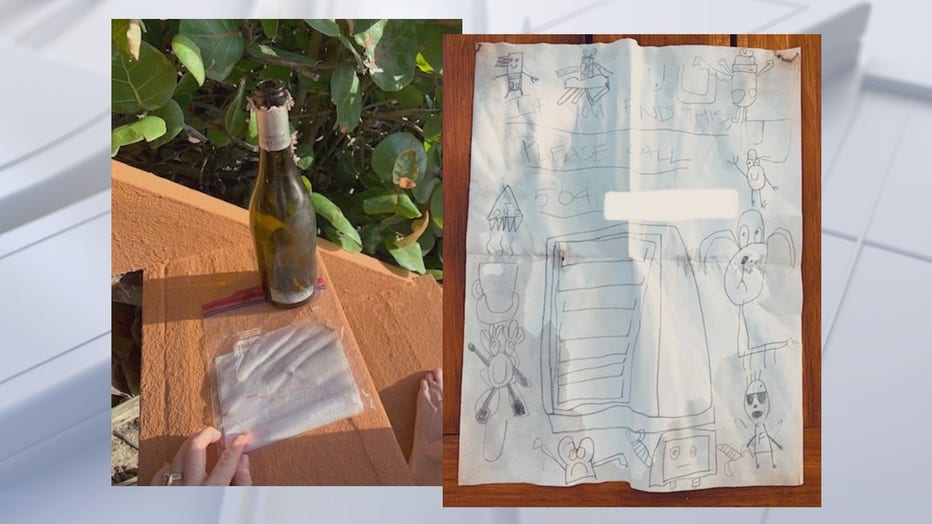 "It’s a cute little drawing," she said holding up the paper.  "It says if you find, ‘Please call this number,’ so I immediately called this number."

On the other end of the line, she got in touch with Parkerson Browne and his mom.

The seven-and-a-half-year-old had been swimming with sharks and boating around The Bahamas with his family in early April.  During some downtime, he and his big brother got creative.  FOX 35 News asked Parkerson if he’d ever put a message in a bottle before for someone to find.

He’s unsure if any of his other bottles had ever been found since no one responded to his note.

This time he had tossed the bottle overboard in The Exumas.

"I just kind of forgot that I threw it in there," Parkerson said.

In six weeks the Gulf Stream carried the bottle around 371 miles to Melbourne Beach where Gonzalez found it.  "I didn’t think it would go all the way to Florida," Parkerson said.

Through this, a little adventure who lives in New Orleans, visiting The Bahamas made a new friend on the Central Florida coast.

"Finding a bottle.  You know I’ve lived around here my whole life and never found a bottle with a message in inside so that was pretty exciting," Gonzalez said.