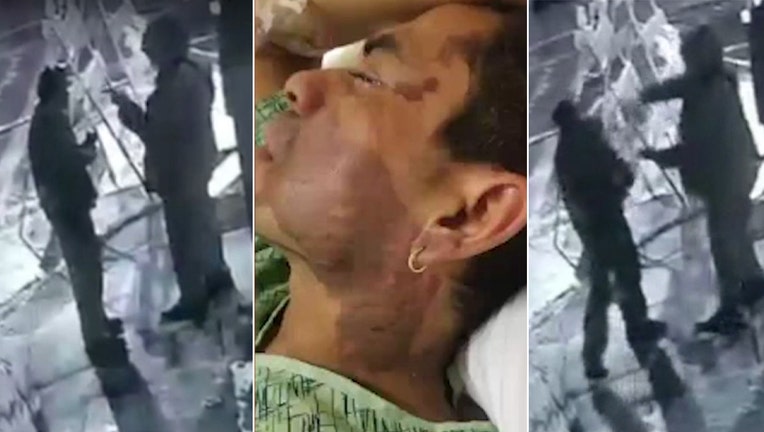 MILWAUKEE, Wis. - Milwaukee police have arrested a man who is accused of throwing battery acid on a Hispanic man in what investigators suspect was a hate crime.

Police said Monday they arrested a 61-year-old white man suspected in Friday night's attack. His identity was not released, and charges are expected Tuesday.

Mahud Villalaz, 42, suffered second-degree burns to his face. He said the attack happened after a man confronted him about how he had parked his car and accused him of being in the U.S. illegally. Villalaz is a U.S. citizen who immigrated from Peru.

At a news conference on Monday, Milwaukee Mayor Tom Barrett, a Democrat, blamed President Trump for inciting hatred against minorities.

"To single out someone because they're from a Hispanic origin is simply wrong. And we know what's happening," Barrett said. "Everybody knows what's happening. It's because the president is talking about it on a daily basis that people feel they have license to go after Hispanic people. And it's wrong."

Surveillance video shows the confrontation but does not include audio.

Villalaz told reporters Saturday he was headed into a Mexican restaurant for dinner when a man approached him and said: "You cannot park here. You are doing something illegal."

Villalaz said the man also accused him of being in the U.S. illegally and of invading the country. He said he ignored the man and moved his truck to another block. But when he returned to the restaurant, the man was waiting for him with an open bottle, Villalaz said.

The man again accused him of being in the U.S. illegally, Villalaz said. He told the man he was a citizen and that "everybody came from somewhere else here," Villalaz said.

That's when he says the man tossed acid at him. Villalaz turned his head, and the liquid covered the left side of his face.