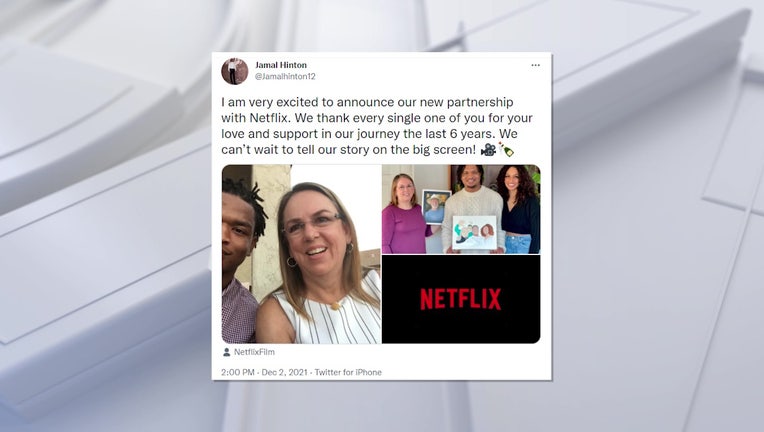 PHOENIX - It appears Netflix is set to tell the story of a now-viral mistaken invitation that has turned into a Thanksgiving tradition of sorts for two Arizona families.

Over the past six years, FOX 10 has reported on the story of Wanda Dench and Jamal Hinton a number of times. The now-viral invite was sent in 2016, when Dench mistakenly sent a Thanksgiving dinner invite to a person she thought was her grandson.

That person, as it turns out, happened to be Hinton, who was 17 at the time. Instead of un-inviting him, Dench still extended an invitation for Hinton to a Thanksgiving dinner.

"I was, like, 'wow, she is really nice, I should really go'," said Hinton at the time. "She seems really sweet. Just a nice lady, I guess."

"Grew up in a military family. My dad is Navy, so we would invite vets over that we didn't know either for Thanksgiving," said Dench at the time. "I saw his picture, and even though I invited him, I did not think for a second that he'd want to come to my house after seeing my picture!"

"It has been an amazing journey," said Dench.

"She is an amazing person. She is the best," said Hinton. "Me and Wanda will forever be friends."

Since then, their relationship has also grown into something even more than a once-a-year holiday get together.

"Now, we feel like we can talk about everything and anything. It has been amazing," said Hinton.

On Dec. 2, Hinton announced a new partnership with Netflix over their story.

According to a report by Variety, the movie is set to be called 'The Thanksgiving Text,' and Abdul Williams is set to write a screenplay for the movie. The screenwriter confirmed the news on his Instagram account on Dec. 2.

"I’ve wanted to write something set during Thanksgiving (easily my favorite holiday) and this true story of how an accidental text led to an unexpected and genuine friendship grabbed me right away," read a portion of the Instagram post.

There is no word on when the movie might be released on the streaming platform.