Thousands of starfish have been spotted along beaches in South Carolina in late June.

FRIPP ISLAND, S.C. - Shannon Turbeville was walking the beach on Fripp Island on a Sunday evening when she stumbled upon a not-so-typical sight — more than 1,000 starfish cluttered the sand.

“Everywhere we went, there were clusters of them,” she told the Island Packet- Beaufort Gazette on Tuesday.

So what’s happening off Lowcountry beaches that’s pushing these creatures to shore?

Turns out, “mass starfish strandings” are more common than we think. 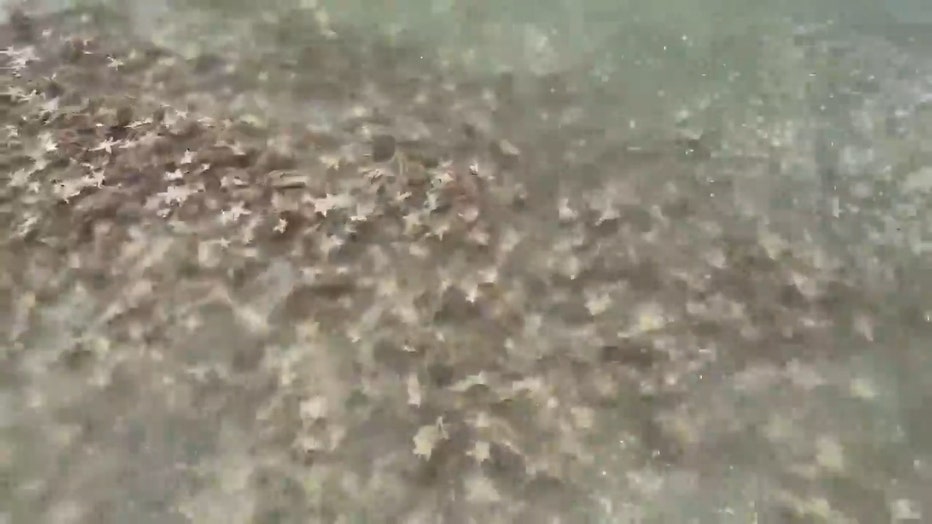 “All those little marine animals that are ectothermic (cold blooded) like starfish, sea cucumbers, and snails can lose mobility and get dislodged from the sea floor if it gets too cold,” Miller said. She said groups of jellyfish are washed to shore by the masses for the same reason.

She added that the stranded animals may or may not be dead when they wash ashore, but it’s nothing to worry about.

Miller said that cold water temperatures in combination with strong winds and currents push these creatures to shore by the masses. On Christmas Day in 2014, an estimated 100,000 sea stars washed ashore Fripp Island.

David Lucas, a spokesman at SCDNR, said mass starfish strandings along the SC coast “are not uncommon” and officials usually see one or two incidents per year.

“They’re at the mercy of the currents and often get pushed ashore,” Lucas said in an email to the Packet. “Given the unusually low water temperatures that we’ve seen since New Year’s Day, however, it’s likely that cold weather is also playing a role in these strandings.”

Water temperatures off the Charleston coast were around 46 degrees Tuesday, according to NOAA, which is below the monthly 50-degree average for January.

What to do if you see a starfish stranded

Lucas said that SCDNR doesn’t have any official recommendations for people who discover these mass strandings. If the starfish or sand dollar looks alive, it might be best to throw it back into the ocean.

On Hilton Head, it’s illegal to take home any living beach fauna including starfish and sand dollars. It could result in a $500 fine.

“Unfortunately, quite often the animals stranded in this way will be already expired (or close to it) by the time they are noticed,” Lucas said. “So practically speaking, (throwing it back in the ocean) may not do much good. But there is also no reason for folks not to try it if they are moved to do so.”