How flying snakes glide through the air

The snakes make an undulating motion as they do it, which allows the creatures to glide and stop them from falling, researchers say.

BLACKSBURG, Va. - Flying snakes are able to undulate their bodies as they glide through the air, and those unique movements allow them to take

These snakes, such Chrysopelea paradisi, also known as the paradise tree snake, tend to reside in the trees of South and Southeast Asia. While up there, they move along tree branches and, sometimes, to reach another tree, they'll launch themselves into the air and glide down at an angle. 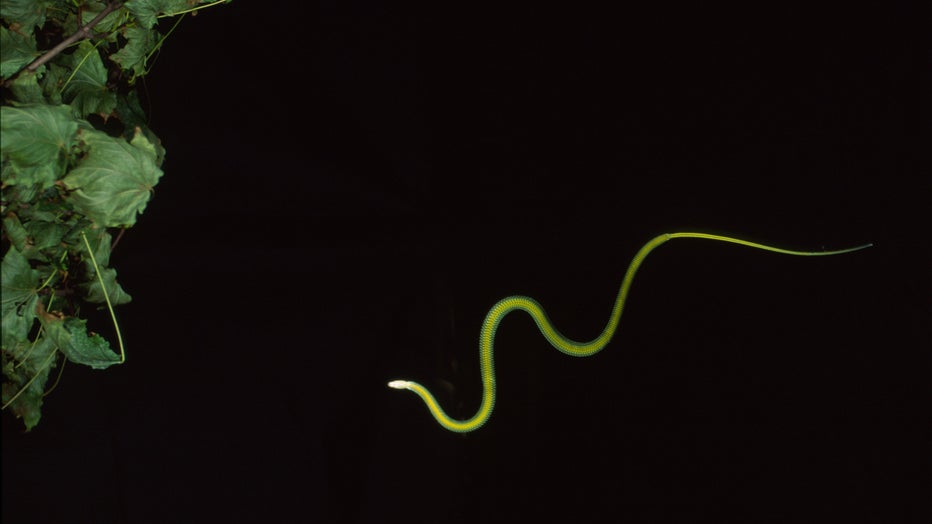 For their research published in the journal Nature Physics, scientists from Virginia Tech put motion-capture tags on seven snakes and filmed them with high-speed cameras as the snakes flew across a four-story high theater.

Jack Socha, a professor in the department of biomedical engineering and mechanics at Virginia Tech who has studied these snakes for more than 20 years, worked with his colleagues to build a 3D model after measuring more than 100 live snake glides.

Their model factors in frequencies of undulating waves, their direction, forces acting on the body, and mass distribution. With it, the researchers have run virtual experiments to investigate aerial undulation.

“In all these years, I think I’ve seen close to a thousand glides,” said Socha in a statement. “It’s still amazing to see every time. Seeing it in person, there’s something a little different about it. It’s shocking still. What exactly is this animal doing? Being able to answer the questions I’ve had since I was a graduate student, many, many years later, is incredibly satisfying.”

We have all been warned to check for signs of skimmer devices at gas station pumps, but a Kansas woman was faced with a 'threat' of a different kind at the pump this week.

In one set of experiments that aimed to discern why undulation was part of each glide, they simulated what would happen if it wasn’t. They did this by turning it off. When their virtual snake couldn't undulate in the air, its body would fall.

That test, paired with simulated glides that kept the movement going, confirmed their hypothesis -- that aerial undulation enhances rotational stability in flying snakes.

"This work demonstrates that aerial undulation in snakes serves a different function than known uses of undulation in other animals, and suggests a new template of control for dynamic flying robots," the scientists conclude in their paper's abstract.