The state of Florida says the Giant African land snail invasion in Pasco County is getting worse and they are carrying a dangerous parasite.

NEW PORT RICHEY, Fla. - Florida officials are making a dent in the search for the slimy, invasive snail species about one month after their discovery in New Port Richey.

Crews with the Department of Agriculture have found nearly 3,000 giant African land snails around the quarantined area, they announced Tuesday.

The initial snail sighting was first confirmed by a Pasco County Master Gardener, who found the almost 8-inch-long snail in the New Port Richey area – specifically in an area near Massachusetts Avenue and Rowan Road. The confirmation of the return of the Giant African land snail came on June 23.

Last week, officials confirmed that the snails tested positive for a dangerous parasite called rat lungworm, which can cause meningitis in humans, which experts said is another reminder to avoid touching the invasive snails.

The snails eat more than 500 different types of plants and feed on stucco for calcium. They can cause structural damage based on their diet.

"They can completely devastate a crop, like tomato or pepper," said Jason Stanley, a biological administrator with the Florida Department of Agriculture. "These white, fleshy snails are very popular in the pet trade. Someone probably had a population in an aquarium and got tired of them laying so many eggs and dumped them and then, all of a sudden, we've got a population explosion."

The snails remain a threat in Hawaii and the Caribbean after their eradication in Florida in 2021. Each snail has both female and male reproductive organs, so they can reproduce rapidly. It is able to reproduce several more times after mating once. 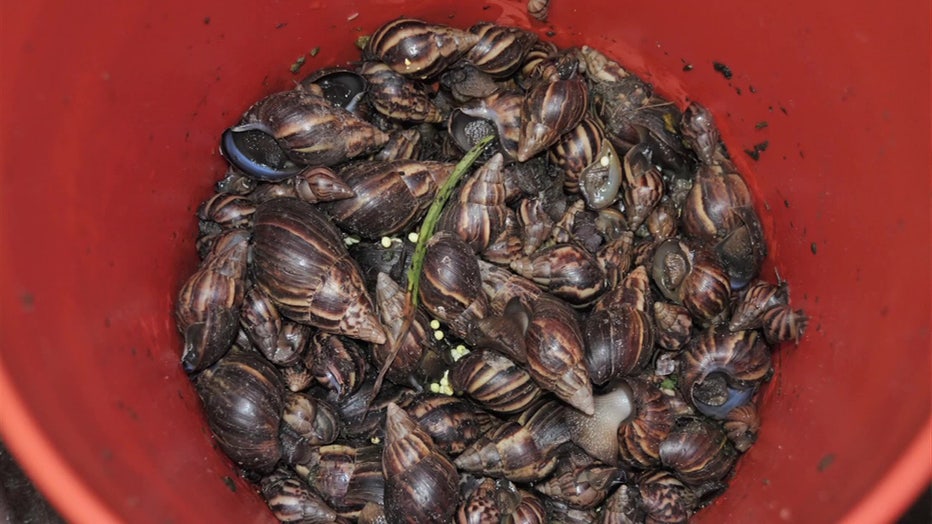 They can have about 1,200 eggs every year, and they are also one of the world's largest land snails. The state continued its search Thursday, using dogs that are trained to sniff out giant African land snails. Each snail has both female and male reproductive organs, so they can reproduce rapidly. It is able to reproduce several more times after mating once.

The invasive species can range in size from a few inches to up to eight inches long.

The giant African land snail was first discovered in southern Florida in the 1960s. It took officials ten years and a total of $1 million to eradicate it, according to the USDA. The species made a return in 2011 and eradication efforts took another ten years.