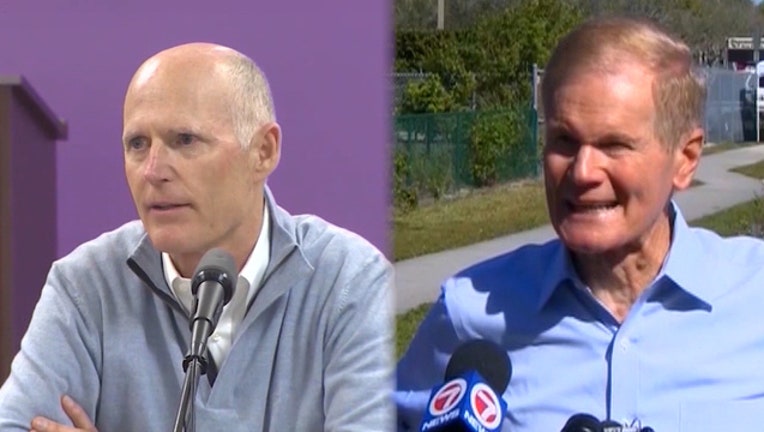 Nelson, a Democrat, and Scott, a Republican winding up his last year as governor, reached almost no consensus during the hour-long Telemundo debate, which was scheduled to air Tuesday night.

Instead, Nelson accused his opponent of lying, and Scott painted the incumbent as a partisan do-nothing who’s accomplished little in his nearly 20 years in the Senate.

“The governor keeps coming out with one whopper after another. Apparently, you never got your mouth washed out with soap after telling a lie because you keep on going on, on every part of my record,” Nelson shot back, according to a transcript released Tuesday afternoon by Telemundo.

The two also tangled about Brett Kavanaugh, President Donald Trump’s Supreme Court nominee who vehemently denies allegations by Christine Blasey Ford and at least two other women who have accused him of sexual misconduct while in high school or college.

Nelson said he intends to vote against Kavanaugh, adding that he tried repeatedly in vain to meet with the appellate judge.

Ford “was expressing for millions of women in this country the ‘me too,’ that sexual assault has happened to them. And she was doing that in front of 11 Republican men that seemed to dismiss it,” Nelson said, referring to the Republicans on the committee.

Kavanaugh, who angrily criticized the confirmation process and what he viewed as a Democratic conspiracy to thwart his confirmation, lacks “the temperament that is needed of what you want to put someone on the highest court in this land,” Nelson said.

But Scott rebuked Nelson for having decided to vote against Kavanaugh even before the hearing, accusing Nelson of saying he would reject whoever was nominated.

“The way the U.S. Senate has handled this, it’s a circus. It’s more like a Jerry Springer show,” Scott scolded, calling Kavanaugh and Ford “just pawns in some political game.”

The testimony of both Kavanaugh and Ford were “convincing and raw, pure emotion,” Scott said.

Scott then assailed Nelson for failing to expose Congressman Alcee Hastings for settling a sexual assault claim for over $200,000.

“You know governor, you just can’t tell the truth,” Nelson punched back, adding that the state’s newspapers have branded Scott as “a walking conflict of interest.”

The senator cited an Orlando Sentinel story that Nelson said showed that “every election that you’ve ever run … you always blame the other guy.”

Both campaigns have attempted to endear their candidates to the more than 1 million Puerto Ricans --- and up to 50,000 more who moved here after Hurricane Maria --- who call Florida home.

The day before the debate, Nelson secured the endorsement of Puerto Rico Gov. Ricardo Rosselló, despite Scott’s repeated trips to the U.S. territory following last year’s massive storm, which wiped out electricity island-wide and resulted in 3,000 deaths. Trump has also been widely disparaged for accusing Democrats of inflating the number of fatalities.

“The president has treated its citizens as second-class citizens,” Nelson said, mocking Trump for throwing paper towels into the audience when he visited Puerto Rico shortly after Maria made landfall in September 2017.

“Now, my opponent has said when down there in Puerto Rico, what would you have done differently? And he said, quote, I would not have done anything differently. I think that pretty well tells you about the treatment of the people from Puerto Rico,” Nelson said.

Scott countered that he wanted “to do everything I can to help Puerto Ricans” after the storm.

“It was never about politics. It was about helping our fellow citizens,” he said, rattling off a list of the aid the state provided to the island and to migrants who fled to Florida.

In front of the Hispanic debate audience, Scott, who has close ties to Trump, sought to separate himself from the president on the issue of children whose parents illegally brought them into the country.

Scott again blamed Nelson for failing to address the problem in Washington, calling it “remarkable” that the senator would “talk about doing something.”

“He’s been there when his party controlled both chambers and the White House, and he did nothing,” Scott said.

The two candidates also pointed the finger at each other over recent outbreaks of toxic algae and red tide that are impacting waterways and beaches on both coasts.

“Red tide is something that's naturally occurring. I've declared a state of emergency,” Scott said, saying the state has sent “millions” of dollars to the counties to deal with the crisis and committed $17 million for research projects.

But he blamed Nelson for the toxic algae outbreak, saying it was linked to the failure to improve the Herbert Hoover Dike around Lake Okeechobee.

“He has never done anything to get us the money to fix the dike at Lake Okeechobee, which is a 100 percent federal project,” Scott said.

Nelson called that “a whopper,” pointing to major cuts in environmental funding by Scott that affected water management districts and eliminated the Department of Community Affairs.

During his eight years as governor, Scott has “systematically disassembled the environmental agencies of this state,” Nelson said.

“You see the result. You put pollution in the water, it will grow the algae in the heat of summer. And then when that algae goes down the rivers and mixes with a bacteria known as red tide, it supercharges that,” he said.

But Scott said environmental funding has increased during his tenure, including a state commitment to spend $200 million a year on Everglades restoration. He also said he worked with Trump to secure funding for the dike repairs, which he said would be completed in 2022.

Also, the two candidates clashed over gun-control laws in the wake of the Feb. 14 mass shooting at a Parkland high school killed 14 students and three faculty members.

Nelson pointed to Fred Guttenberg, who was sitting in the audience and who lost his 14-year-old daughter, Jaime, in the attack.

“Fred wakes up every day and goes to the cemetery the first thing. He'll never have another birthday for Jaime. My opponent has an A-plus rating with the NRA. He has passed more NRA-backed legislation than any other governor in the history of this state,” Nelson said. “I hope governor, that you will look Fred Guttenberg in the face, and tell him that you're not going to support those kind of policies that you have with the NRA.”

Scott said his “heart goes out” to all the shooting victims and their families. And he said he worked with parents, like Guttenberg, in crafting a quick response to the shooting that includes more law-enforcement officers and more security measures for schools and more mental health counselors.

“And within three weeks after the Parkland shooting, we passed a comprehensive bill,” Scott said.

In contrast, Scott again said Nelson has “got nothing done.”

“He can talk like he cares about these things. Here's the difference, Sen. Nelson is fine with taking away certain guns from law-abiding citizens,” Scott said.