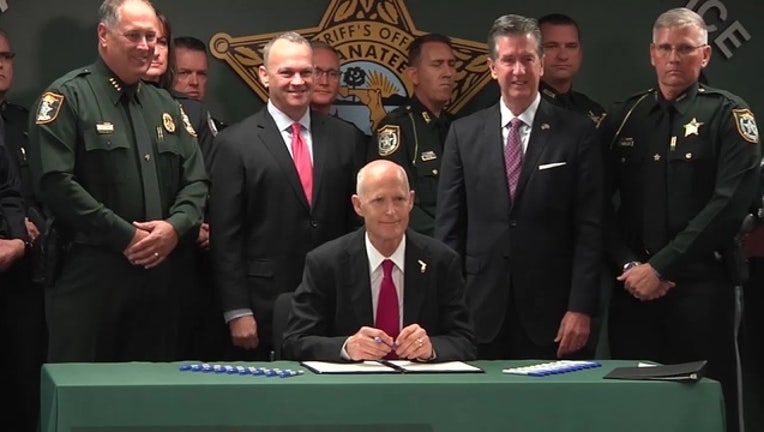 TALLAHASSEE (NSF) - Laws taking effect today will add benefits for first responders who suffer post-traumatic stress disorder and impose harsher penalties on people who abuse animals, along with 19 other measures signed by Gov. Rick Scott after the 2018 legislative session.

The laws, which kicked in to effect Oct. 1, range from allowing credit cards to be used for background checks when firearms are purchased to doling out tougher punishment for people who steal bee colonies or trespass at airports.

Most laws crafted during the legislative session, including the state’s $88.7-billion budget, hit the books on July 1. But others had later “effective” dates.

The office of state Chief Financial Officer Jimmy Patronis, who has started running a campaign ad that highlights his support for the law, announced last week the launch of training materials for first responders on PTSD.

“We’ve heard terrible stories about the impact tragedies like Pulse, Parkland and most recently Jacksonville Landing, have on our first responders and their families,” Patronis, whose job includes serving as state fire marshal, said in a statement. “The training is an important step needed to help our first responders.”

According to a 2015 article published in the Journal of Emergency Medical Services, 6.6 percent of 4,000 first responders surveyed had attempted suicide, which is more than 10 times the rate in the general population.

Under the new law, first responders who have witnessed the death of a minor or witnessed a death that involved “grievous bodily harm of a nature that shocks the conscience” can file workers’ compensation claims for lost wages.

The new law is expected to increase workers’ compensation costs for cities and counties that employ first responders by upward of $7 million, according to the National Council on Compensation Insurance.

The new law, named “Ponce’s Law” after the puppy, allows judges to bar people convicted of animal cruelty from owning pets. The legislation also increases the severity ranking of animal-abuse related crimes, making it more likely that offenders would go to jail upon conviction.

Kate MacFall with the Humane Society of the United States hopes the new law will allow judges to make sure people who mistreat animals are not allowed to repeat the cycle of abuse.

In addition to dealing with animal cruelty, the new law also creates policies and procedures for animal shelters to use following natural disasters, such as hurricanes, to return lost pets to their owners.

“It puts more teeth into it. It stiffens the penalty for people who abuse animals,” MacFall said. “Who wouldn’t support that? This all came from a dog named Ponce, that was beaten to death last year. It was a horrific tragedy.”

Other new laws going into place on Oct. 1:

--- HB 55, allows people buying guns to use credit cards to pay for background checks. They have been required in the past to pay with personal checks, money orders or cashier’s checks.

--- HB 135, allows deaf people to voluntarily identify themselves as hearing-impaired when they register vehicles. The idea, which came from a Tallahassee police officer whose son is deaf, is intended to prevent communications issues with deaf drivers that could inadvertently lead to confrontations.

--- HB 523, increases penalties to a third-degree felony for people who trespass on airport property to injure other people, damage property or impede the operations of aircraft. The bill is in reaction to instances since 2014 of people getting on property at Florida airports, including Orlando International, Tampa International and Miami International.

--- HB 961, allows businesses such as bars to receive up to 10 cases of branded glassware --- 24 glasses per container --- a year from brewers or importers. Supporters of the “beer glass” bill maintained that the change would allow small businesses to save on the cost of glassware. But a number of craft brewers opposed the measure, arguing it would allow a small number of brewers who could afford the costs to flood the market with company-branded glassware.