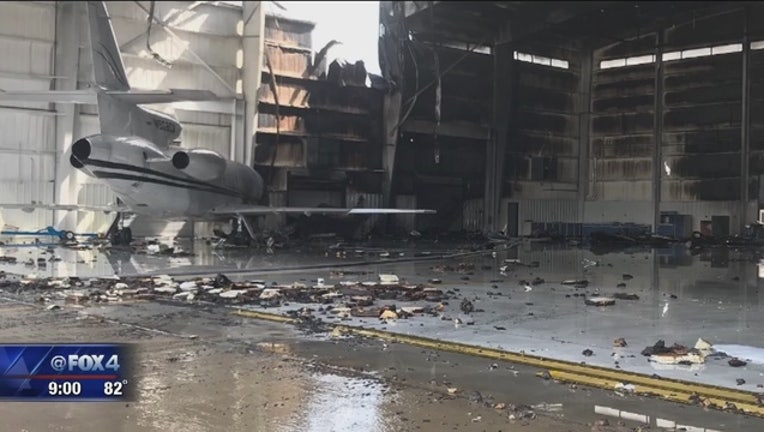 DALLAS (AP) - Seconds before a small Florida-bound plane crashed at a suburban Dallas airport, killing all 10 people on board, the crew commented on a problem with the left engine, federal officials said Tuesday.

The Beechcraft BE-350 King Air struggled to gain altitude before veering to the left and crashing into a hangar at the Addison Municipal Airport on Sunday morning, killing the two crew members and eight passengers, witnesses and authorities said.

Bruce Landsberg, the vice chairman of the National Transportation Safety Board, said at a Tuesday news conference that the pilot comments were heard on the cockpit voice recorder, which was recovered from the charred wreckage. He said the crew was cleared for takeoff about a minute before the recording ended.

The recording captured apparent confusion in the cockpit as the plane headed down the runway, Landsberg said. Four seconds later, the pilots indicated there was a problem with the left engine. After another five seconds, three alarms sounded, warning pilots that the plane was banked too sharply to one side, he said. The recording ended moments later.

Technical experts will review the recording in Washington and produce a transcript, which the NTSB will release later along with other reports from its investigation, Landsberg said.

NTSB investigators said they don't know yet if the captain or co-pilot was flying the plane. The board is reviewing records for both, including their recent flights. The NTSB interviewed a pilot who flew with the captain several weeks ago and reported nothing unusual, officials said.

The Catholic Diocese of Dallas said that Ornella Ellard was also killed. She was married to Brian Ellard and was the mother of Alice and Dylan Maritato.

Jinky Hicks, the presiding director of Tennis Competitors of Dallas, said a league director, Mary Titus, and her husband, John, were among the passengers who died. She said five other members of the tennis organization were also on the plane, which was headed to St. Petersburg, Florida.

The private plane was not required to have a flight data recorder, which tracks the performance of virtually every system on board. National Transportation Safety Board investigators will rely on physical evidence at the crash site, video, radar information and witness accounts to determine the cause of the crash.

Officials previously indicated that nearly all off the plane was destroyed in the fire, but they said Tuesday that they'll be able to analyze significant parts.

Lead NTSB investigator Jennifer Rodi said both engines and their propeller assemblies were recovered Monday and were being taken apart for closer examination in another hangar. She said the main part of the fuselage was destroyed but a piece of the tail assembly "larger than I am" survived. She said investigators will try to piece together, like a puzzle, parts of the wings.

Investigators have video from four cameras, including two positioned at the end of the runway.

The NTSB said the airplane had been topped off with fuel before takeoff. The crash created a plume of thick, black smoke.

An earlier version of this story was corrected to reflect that Jinky Hicks is a woman, not a man.