The Bootleg Fire burning in southern Oregon was measured at 153,535 acres and remained zero percent contained late on Monday, July 12, according to officials. (Credit: Bootleg Fire via Storyful)

The number of wildfires that have burned in the United States so far in 2021 is the largest in a decade, according to data from the National Interagency Fire Center.

Currently, 67 large fires have burned through 917,954 acres across the U.S. and only three have been contained, according to the NIFC.

The states that have the largest number of fires burning this week are Arizona and Idaho, with 13 fires each and Montana with 12. 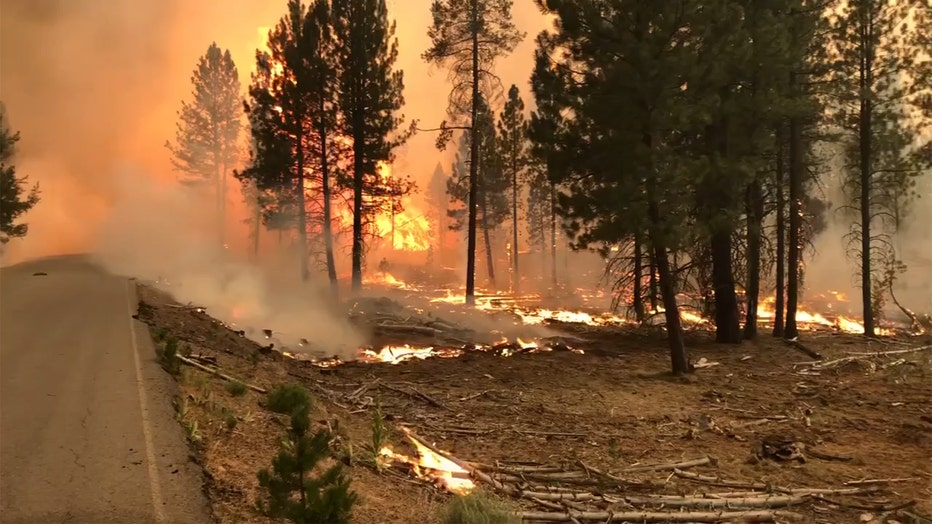 The fires erupted as the West was in the grip of the second bout of dangerously high temperatures in just a few weeks. A climate change-fueled megadrought also is contributing to conditions that make fires even more dangerous, scientists said.

Meanwhile, an international team of 27 scientists calculated that climate change increased chances of extreme heat occurring by at least 150 times, but likely much more.

The study, not yet peer-reviewed, said that before the industrial era, the region's late June triple-digit heat was the type that would not have happened in human civilization. And even in today’s warming world, it said, the heat was a once-in-a-millennium event.

A fire in the Fremont-Winema National Forest in south-central Oregon has burned an estimated 315 square miles, officials said on July 13, amid smoke warnings and evacuation orders. (Credit: Michelle Dallas via Storyful)

But that once-in-a-millennium event would likely occur every five to 10 years once the world warms another 1.4 degrees, according to a study from World Weather Attribution. That much warming could be 40 or 50 years away if carbon pollution continues at its current pace, one study author said.

The study also found that in the Pacific Northwest and Canada, climate change was responsible for about 3.6 degrees of the heat shock. Those few degrees make a big difference in human health, said study co-author Kristie Ebi, a professor at the Center for Health and the Global Environment at the University of Washington.

The National Weather Service said the current heat wave had peaked in many areas, and remaining excessive heat warnings were expected to expire by Tuesday night.

"While we are eagerly anticipating a cooling trend over the next few days, we still have another hot day to get through," the Medford, Oregon, weather office said.

The Bootleg Fire in southern Oregon grew to almost 202,000 acres (about 315 square miles) by July 13, making it the largest in the US, officials reported. (Credit: NOAA via Storyful)

The largest fire in the U.S. Tuesday was burning in rural southwestern Oregon. The Bootleg Fire — which has ravaged about 316 square miles, an area more than twice the size of Portland — threatened some 2,000 homes, state fire officials said. It had burned about 21 homes as well as other minor structures, fire spokesman Daniel Omdal said Tuesday.

"We are under extreme weather conditions. The humidity is low, the fuels are highly flammable and all those provide conditions for significant fire activity," Omdal said.

Jet fuel shortages caused by the COVID-19 pandemic have yet to bounce back on the West coast, stoking fears in airport officials who may have to wave off planes and helicopters that drop fire retardants during an already ferocious wildfire season, potentially endangering surrounding communities.

"We haven’t run into that before," said Jessica Gardetto, a National Interagency Fire Center spokeswoman in Boise, Idaho, and a former wildland firefighter. "It’s a scary thought, with all the shortages going on right now."

The fires have forced evacuations in numerous areas with scattered homes and tiny communities where some burned houses and other structures have been observed, but total losses were still being tallied.

The Associated Press and Storyful contributed to this report.