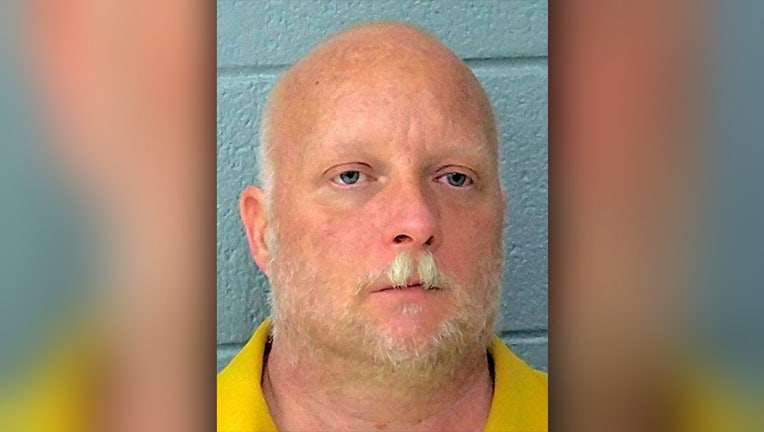 Feaster was charged Wednesday with a felony count of assault and battery with a deadly weapon. (Garfield County Sheriff's Office)

Alexander John Feaster, 44, fired several shots from an AR platform rifle without warning, striking the woman in her lower abdomen and legs as she was running away, the Garfield County sheriff's office said in an affidavit obtained by the Enid News & Eagle.

The 26-year-old was found lying in a ditch and several people were applying first aid when deputies arrived around 3 a.m., Sheriff Jody Helm told KFOR-TV.

The woman had been at a party across the street, according to police, and initial information suggested she tried to steal the swastika flag on a dare. However, Helm told NBC News that there was “conflicting information” regarding her reason for taking the banner.

Deputies arrested Feaster without incident, authorities said. The affidavit stated that several firearms, ammunition and military-style gear were found inside his home.

Neighbors told KFOR that Feaster had been flying two Nazi flags outside his home for about a year. They were taken several times in the past.

“His flags got stolen a couple times when he first put them out, but nothing ever came of it,” a neighbor said. “This is the first time it’s ever come to violence.”

The neighbor said Feaster mostly kept to himself and was known to wear a black uniform with a red swastika armband in public.

Feaster was charged Wednesday with a felony count of assault and battery with a deadly weapon, the News & Eagle reported. He was being held at the Garfield County Detention Center with a bond of $500,000.

The woman was being treated at a hospital for her wounds and was expected to survive, reports said. It was unclear whether she would face charges for taking the flag.