TAMPA, Fla. - "Grease" actress Olivia Newton-John, 73, died Monday after a long journey with breast cancer. The singer and actress was an outspoken advocate for health awareness, and it's what connected her to Moffitt Cancer Center in Tampa.

Newton-John was admired around the globe and held a particularly special place in the hearts of those at Moffitt Cancer Center. Founder H. Lee Moffitt released a statement online Monday saying, "Olivia was an incredible friend of the cancer center, a friend to me, an international figure in the fight against cancer, and a treasure and inspiration to her fans all over the world."

RELATED: Olivia Newton-John, singer and actress of 'Grease,' dies at 73

"She didn't wear it around on her sleeve, she just was always there, she was always pushing it," said Edward Droste, immediate past chair of the Moffitt Foundation Board of Directors.

Droste served on Moffitt’s National Board of Advisors alongside Newton-John. The singer and actress joined the Board in 2009. The diverse group of prominent figures are Moffitt ambassadors who offer their expertise and council on issues relating to the cancer center.

"She was so instrumental at when we were at an early formidable stage, not 7,000 employees, she brought notoriety," Droste said.

Newton-John spoke out frequently on behalf of Moffitt, advocating for research, early detection and prevention of cancer. Even visiting the Tampa Bay area several times for special events and fundraisers. 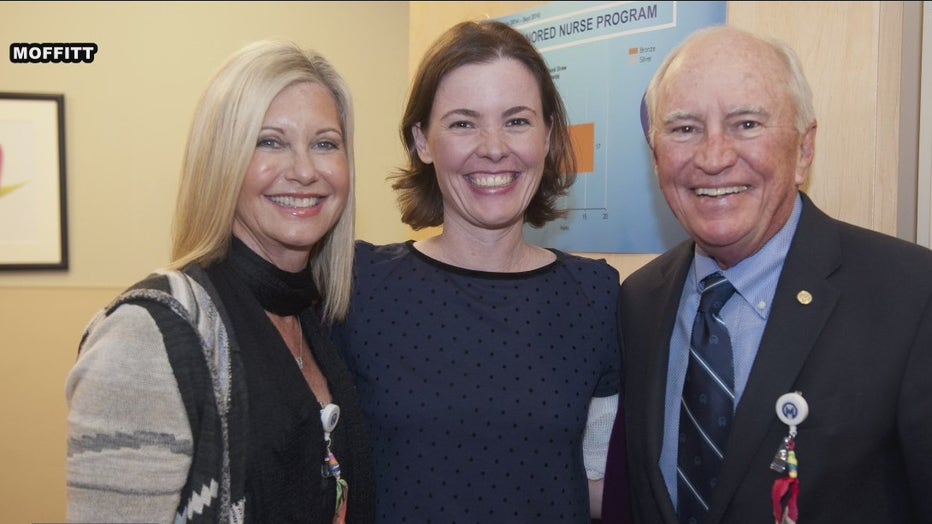 "She also started a cancer center in Melbourne, Australia, and that brought a lot of collaboration," said Droste.

The entertainer was passionate about health care. She was first diagnosed with breast cancer in 1992, and shared her multiple battles with the disease publicly for three-decades.

"I think we will use that as a kind of a catapult to even do bigger and better things in her name and her legacy," Droste said.