WASHINGTON (AP) - As strained U.S. hospitals brace for a new surge of COVID-19 cases caused by the fast-spreading omicron variant, doctors are warning of yet another challenge: the two standard drugs they’ve used to fight infections are unlikely to work against the new strain.

For more than a year antibody drugs from Regeneron and Eli Lilly have been the go-to treatments for early COVID-19, thanks to their ability to head off severe disease and keep patients out of the hospital.

But both drugmakers recently warned that laboratory testing suggests their therapies will be much less potent against omicron, which contains dozens of mutations that make it harder for antibodies to attack the virus. And while the companies say they can quickly develop new omicron-targeting antibodies, those aren’t expected to launch for at least several months.

A third antibody from British drugmaker GlaxoSmithKline appears to be the best positioned to fight omicron. But Glaxo’s drug is not widely available in the U.S., accounting for a small portion of the millions of doses purchased and distributed by the federal government. U.S. health officials are now rationing scarce drug supplies to states.

"I think there’s going to be a shortage," said Dr. Jonathan Li, director of the Harvard/Brigham Virology Specialty Laboratory. "We’re down to one FDA-authorized monoclonal antibody" with omicron because of the reduced effectiveness of Regeneron and Lilly's drugs.

The delta variant still accounts for more than 95% of estimated U.S. cases, according to the Centers for Disease Control and Prevention. But agency leaders say omicron is spreading faster than any past variant and will become the dominant strain nationwide within weeks. 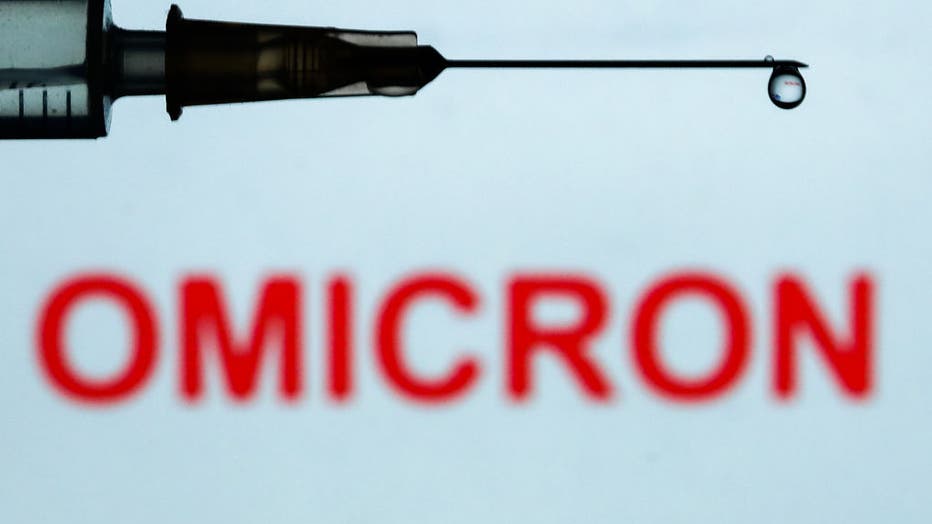 Medical syringe is seen with 'omicron' sign displayed in the background in this illustration photo taken in Krakow, Poland on Dec. 14, 2021. (Photo by Jakub Porzycki/NurPhoto via Getty Images)

Delivered by injection or infusion, antibodies are laboratory-made versions of human proteins that help the immune system fight off viruses and other infections.

Glaxo's drug, developed with Vir Biotechnology, was specifically formulated to bind to a part of the virus that is less likely to mutate, according to the companies. Early studies of laboratory-simulated omicron by the drugmakers and outside researchers show promising results.

Supply of the drug is "extremely limited, and additional doses of the product will not be available until the week of January 3rd," the U.S. Department of Health and Human Services said in an statement posted online.

After pausing distribution last month to conserve supply, HHS is now shipping 55,000 doses of the drug, called sotrovimab, to state health departments, with the doses arriving as early as Tuesday. An additional 300,000 are expected in January.

The agency said it is distributing the drug to states based on their levels of infections and hospitalizations.

HHS recommends states conserve the drug for the highest risk patients who are most likely to have omicron infections, either based on laboratory testing that can identify the variant or elevated levels of omicron spread in local communities, identified as 20% and higher.

High-risk patients include seniors and those with serious health problems, such as obesity, heart disease, diabetes and immune-system disorders.

Prior to the pause in shipments, Glaxo’s drug accounted for about 10% of the 1.8 million antibody doses distributed to state health officials between mid-September and late November, according to federal figures.

London-based Glaxo says it is on track to produce 2 million doses by May, under contracts with the U.S., Canada, the U.K., Japan and several other countries. The company is working to add more manufacturing capacity next year.

The loss of two leading antibody therapies puts even more focus on a pair of highly anticipated antiviral pills that U.S. regulators are expected to soon authorize.

The drugs from Pfizer and Merck would be the first treatments Americans can take at home to head off severe disease. Pfizer’s drug in particular has shown a powerful effect, curbing hospitalizations and deaths by nearly 90% in high-risk patients.

"If it’s rolled out effectively this has a real big potential," to make up for antibody treatments, said Andrew Pekosz, a virologist at Johns Hopkins University. "That’s an immediate place where these antivirals could minimize the impact of omicron."

Still, initial supplies of both drugs are expected to be limited.

The shrinking toolbox of treatments is a painful reminder that the virus still has the upper hand in the U.S., even with more than 200 million Americans fully vaccinated.

Scientists around the world are racing to understand omicron, including whether it causes more or less severe disease and how easily it evades protection from prior infection, vaccination, and antibody drugs.

"We're certainly going to see hospitalizations rise," said Dr. James Cutrell of the University of Texas Southwestern Medical Center. "If we have a lack of antibodies that’s certainly going to contribute to that many more patients needing to be in the hospital."